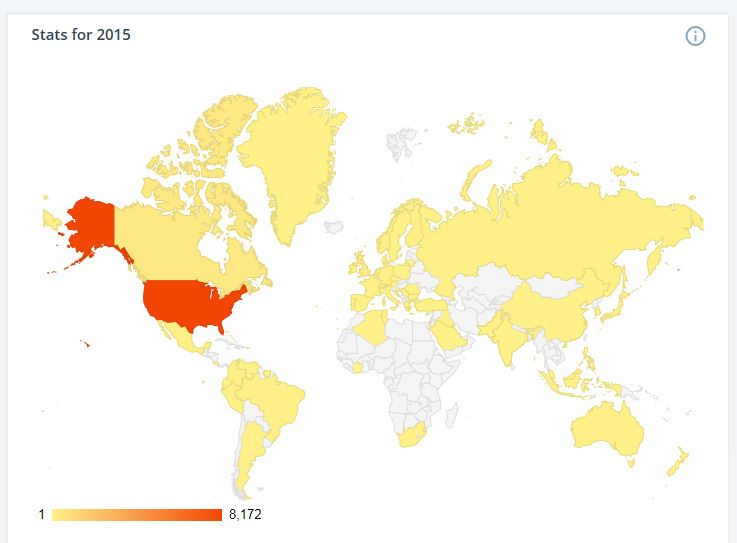 This past week, just before I posted “GLORIA RATES MY T & A,” a quiet threshold was reached on The Bernard Olcott Story blog.  Since putting the page up late Saturday afternoon, February 14, 2015, from my ski loft at Hunter Mountain, New York – someone made the 10,000th view or click onto the site.

To the unknown clicker and to the entire readership, I say, a big THANK YOU is in order!Interestingly, my Dad did not have a middle name.  If he did, perhaps it would be “International.”  His legacy sure is.  Take a look at the map above showing where all the clicks come from over the past year.  The Bernard Olcott Story has now been seen in 68 countries around the world.  After the US, the top 5 countries are Canada, UK, Switzerland, Belgium, and Finland!

I’ve learned a thing or two about my Dad while writing this blog.  For example, he was always very penurious – in a most exacting way, see “HE WAS RICHLY STUNNED!”  What was the source of this parsimony?  I had always rationalized it as being due to some horrific trauma suffered in the Great Depression.  With unemployment soaring past 20% in New York City, maybe my Dad’s family was evicted and reduced to selling fruit from carts?  Some such misery could have been the source of a reluctance to spend, even for his own needs.

For example, one of my Dad’s attorneys reported to me once that he had gone with Dad to some bargain basement discount clothing store.  There, Dad found $5 dress shirts and proceeded to buy several.  The attorney noticed that Dad was selecting various sizes not his own.  He called this to Dad’s attention, but Dad didn’t care!  $5 shirts were too cheap to pass up, fit be dammed!  The attorney relayed to me that, in his opinion, Dad must be getting by on total annual living expenses of less than $15,000!

Well, as it turns out, my Dad’s Dad was a New York City Police Officer, appointed in 1918, just a few months after Dad was born.  He retired as a veteran with full benefits in 1941.  In other words, during the Depression, my Dad’s family was protected by virtue of my Grandfather’s steady employment!  They never suffered from lack of food or shelter!

As previously noted, there was plenty of misery to go around in the Depression.  Was there a time when the entire family of a neighbor ended up at my Grandfather’s door?  I can imagine him giving them the bum’s rush off his stoop.  Michael was tough and I am sure he wanted to set an example so that others wouldn’t try the same thing.

Nobody gave anybody a break.  Dad’s parsimony must have been simply due to commonly felt values of the time: the Depression was caused by a lack of savings, of credit too freely granted, and a consequent overspending.  John Maynard Keynes would not agree with this analysis, but that’s the way many people felt.  I’m certain that most families have such a thrifty and frugal older Uncle who regales the Thanksgiving table with all the economic and political analysis he’s gleaned from Fox News.

I am not often called a workaholic – although Dad certainly was – but this blog is a labor.  Of.  Love.  My Father was a complicated figure.  He touched a lot of people during his days on this orb, and in so many different ways.

Another thing I’ve picked up is that writing for a blog is different than writing for a book.  For the former, you need to get the point quickly and hook the reader with something useful to them (and not to me as the writer!)  I try to include several different themes here to entice readership with take-aways: nostalgic New York, his 5 wives (each one an incredible character), foreign adventures, the Horatio Alger theme of his career and life track, the story of the patent annuity business, and coping with a parent’s dementia.

There are several chapters left out of this blog for various reasons.  You should expect to see them in book form later on.

Thank you for being a passenger with me in my Dad’s blue Cadillac – the one with the blue plush pile carpeting!

The blog will now be taking a break over Christmas.  Please expect a holiday card to be posted here on Christmas Day.  After that, the blog will be back on Thursday afternoon, January 7th for a post that will dive deeper into nostalgic New York than ever before.  It will feature that ghost of the past, the Third Avenue El.  Dad used to ride it every day.

Other upcoming posts in the New Year: