In my post last week, “ARRIVAL,” I cherry-picked some highlights from my career as a Men’s Furnishing salesman at Polo Ralph Lauren. And I will do so again today, with a bit more gravitas.  As well as a big surprise.

First, I should set the reader’s expectations correctly. I did not have Elton John walking in everyday to buy 20 neckties. You could grow old waiting for such a celebrity to walk on by. Generally, the most common occurrence on the sales floor would be the arrival of the Japanese. They would typically stroll in, in small groups, and were looking to buy 5-10 small keepsakes for the office mates back home. So everyone learned the greeting “konichi-wa!” and, to be honest, we the salesmen and saleswomen of PRL could get, well,  excessively “Japanese” with each other.

For example, I learned how to say “beautiful woman” and “ugly woman” in Japanese.  (I’m not sure what gets into me sometimes.)  So if I was having fun with a Japanese customer, I could point at Hollister or Shawn and say to the customer “busu!” (ugly woman).  Once, to my horror, a Japanese customer, clearly too full of a liquid lunch, pointed to his wife and said “busu!” cracking up.  “No, no, no!”  I responded, “bijan” (beautiful woman).  The wife was not happy; I tried to mop up the awkwardness as much as possible.  In any event, I am sure my customer had a most abbreviated evening that night.

Japan always was, and is, a very important part of The Bernard Olcott Story!

The top man, Ralph Lauren himself, would come in every once in a while. This was the most serene guy that you ever laid eyes on. His were fiery blue; the smile broad and wide. I greeted him from my station and he did likewise with that Cheshire cat expression, while extending his hand. A visionary man from a humble background, like my Dad.  But completely different.  I never knew my Dad, for example, to admire his own work like Ralph did.  And then he was gone, drifting away in soft voices with an entourage of store management and corporate executives.

Like I wrote above, however, these were some of the highlights.  As with any job, things could get slow and tedium could set in. During slow times, we were expected to keep our hands busy by straightening displays, stacks of merchandise, swirls of ties, shoe racks, sock columns, hangers festooned with braces, sump pumps, and what-have-you. Every other week, everyone had a late shift on Thursday evenings when the store was open until 8PM.

So one dark autumnal night, I was manning my station of fancy men’s shirts. The store was empty and quiet. So I was doing my best to keep my hands busy. Which meant that I was turning around, grabbing a stack of shirts, and restacking them yet again. I had stacked them all behind me maybe 50 times, when I turned back around to grab a pile that had been straightened a couple of times already.

Reaching underneath the shirts, I steadied the stack and turned around. In front of me was a well-known professor from Cornell University, wearing his trademark corduroy jacket. In fact, he was the author of one of my favorite books, Cosmos (did you know that this was the best-selling science book ever published in the English language?).

I was suddenly face to face with Carl Sagan!

A poignant reminder as to how small we really are…

“Dr. Sagan!” I sputtered. I introduced myself as one of his biggest fans. Graciously, he shook my hand. But, I had to be mindful that my job was to render service to the customer. Billions and billions of stars notwithstanding, the good doctor was there to get some clothes to wear to class and lab in Ithaca. You build relationships in delivering. Introductions out of the way, I got Dr. Sagan into a couple of shirts that he liked. And then he asked me to show him some trousers, so I was off with him to other parts of the store.

From tedium to reverie!

As for waist size, he tried on a pair and came back to say that they were too loose. So I got another pair 2 sizes smaller and asked him to try those on. Now they were too tight. So I grabbed the in-between size and this is when I got to be too clever by half. I announced (did I ever write that I don’t know what gets into me sometimes?), “Well, Dr. Sagan, by running a regression analysis, this should be your proper size.”

The smile on my face was wiped clean by his response.  “What are you doing here?” he shot back at me point-blank. He didn’t mean, what was I doing on the 2nd floor assisting a customer. He meant, what was I doing working in a clothing store? I was glad for the recognition — by my favorite author, no less — and yet sad to be reminded of my dilemma.

After all, I was there to provide the service necessary to deliver a professional and satisfying shopping experience. But when a friendly customer asks a question, you do your best to answer.

It was time to give another sermon.

So I gave him a very abbreviated version of the Bernard Olcott Story, highlighting my Business School experience, the stock market crash, the poor recruitment season, and my on-going job search.  Even though I had not yet achieved the desired results, I was still in the game and trying every day. All the while acknowledging that I needed to be working, at something, anything!  At least I had the opportunity to meet my favorite author!

He listened attentively to me, with great care and compassion. I think he asked me to call him Carl. We spent a long time together talking about clothes, science, and the possibility of extraterrestrial life. He then bought a pile of clothes from me, and wished me good luck.

And then several times later through the years, he sent me the love of his life, his wife and rocket scientist (“bijan”) Annie Druyan, to ask for me at the store when shopping for presents. I was touched. And still am. 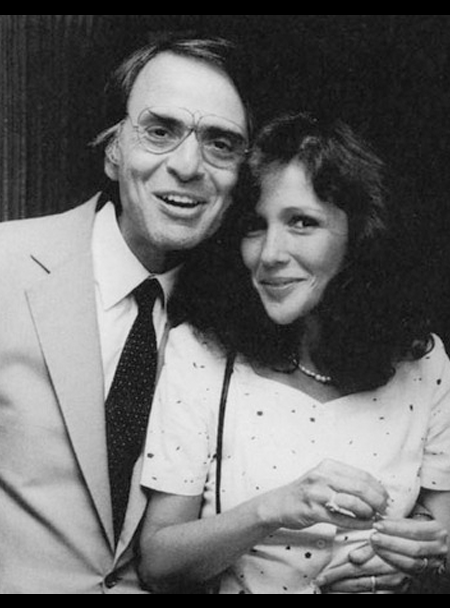 Next week: Customer Sizes allow me to make my mark at Polo!