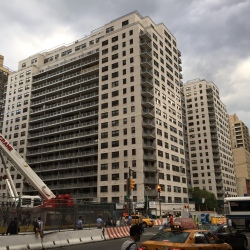 Graciela Levi Castillo was Dad’s wife no. 3 – and my first stepmother.  Their marriage was very short, from January 1963 until January 1965.  Only a few memories of her remain intact from the summer of 1964.  You see, in 1963, my folks had just split up and had not yet worked out all the details.  Dad even came down with Graciela to see me in Orlando once or twice.  My Mom tells me she was very gracious with Graciela during those visits; still, it had to have been somewhat awkward with both parents parading their new spouses in front of the other.

What I remember most about Graciela was that she was as kind to me as she was garrulous.  Meaning, she was very, very kind!

In order to start his life anew with Graciela, Dad quit his apartment at 1050 Fifth Avenue (that he had shared with my Mom) and they moved into Yorkshire Towers, 305 East 86th Street, an immense white brick postwar building on the northeast corner of Second Avenue (see above picture).  As a newly completed building in 1964, deals were always available to new tenants willing to move in during construction.  Dad found such kind of bargains to be irresistible.  The new apartment had much of the same furniture as previously with my Mom, so it had an air of familiarity about it.

END_OF_DOCUMENT_TOKEN_TO_BE_REPLACED 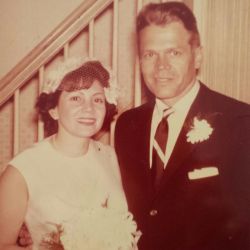 In the spring of 1962, I turned 4 years old. Mom and Dad were living at 1050 Fifth Avenue and Central Park was my playground. In the evening, I would play in my room and when I heard the door open and Dad enter the apartment, I would thrust myself down the stairs, yelling “Daddy, Daddy!” One time I came down the stairs so fast, I tripped and fell. I arrived at the bottom in a tumbled mess.

My Dad would have a seat on the couch, maybe after turning on the hi-fi or plopping the Four Lads on the phonograph. Mom would serve him a Rheingold. “What’s that?” I asked. “Beer,” he said. “Can I try some?” “Sure.” I did, it was not to my taste.

I was oblivious to the fact that the marriage of my Mom and Dad was finished.