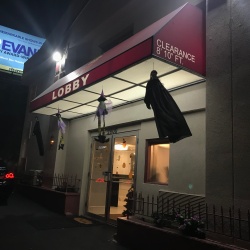 The 2nd part of the Room 31 saga.  I stop and visit the Bates Motel.  Personally.  A repeat from last year.

23 years after the events of my last story, “CRASHES NEXT TO ROOM 31,” would you know that your humble narrator is still plying the highways of the Garden State? In fact, I drive through the Lincoln Tunnel regularly on my way to work.

As I pondered this story, I was furtively glancing over my shoulder while exiting or entering the I-495 trench leading to the gaping hole of the Lincoln Tunnel. It’s a very busy place, a “great attractor” of traffic where cars merge and change lanes on a moment’s notice. I could only steal a glimpse or two safely of the former York Motel, more easily on the New York-bound side. It’s still there, looking much more polished in 2017 than it did in 1994 (or 1982). Gone is the sign advertising “hourly rates.” Up is the new logo of a national motel chain and what appears to be coat of fresh looking white paint.

I had never been a guest of the York Motel on a nightly – or otherwise – basis and thought that stopping by for a quick look around might be interesting. I wondered if I would be able to find the infamous room 31 and what the motel might look and feel like close up.

END_OF_DOCUMENT_TOKEN_TO_BE_REPLACED

Today, on tap for you is a repeat, my number one post from last year.  Please do continue to look under those motel mattresses, if you are a road warrior.

Crashes were not always relegated to software programs. Sometimes I experienced other kinds.  And they often happened close to the office.  Or next to scary places nearby.

In late spring 1994, Dad and I made a marketing call to a potential client without Bob. It was a major telecom company based in northern New Jersey, about an hour’s drive from Weehawken. The prospect was already running one of our competitor’s patent management systems, and wasn’t looking for a change. Rather, this was going to be a straight-up discussion about annuity payment services, right down Dad’s alley.

After some preparation, we plunked down inside my Dad’s lobotomized Mercedes Benz and traced our way to the company via the Garden State’s ribbon of expressways as guided by a crusty folded highway map.  As mentioned in my post “HIS NAME WAS BOB GERHARDT,” Dad had a method of increasing gasoline efficiency in automobile engines. It involved disabling multiple cylinders within the engine based on the simple premise that each cylinder is a source of fuel consumption and combustion. If you can shut them off, you will consume less fuel.

What could be simpler?

END_OF_DOCUMENT_TOKEN_TO_BE_REPLACED 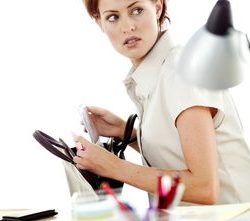 The winter of 1963-1964 started off harshly for adults. Kids like me in kindergarten were oblivious and went about our business playing house, doctor, tag, World Wide Wrestling Federation re-enactments, and what-not.

First there was the Kennedy Assassination for Thanksgiving. I have no idea where I was when the shooting went down in Dallas that Friday at 1:30 PM EST other than that I was probably in class at The Cathedral School off of Eola Park in Orlando. No one came to inform us that the President had been shot and killed. Nope, we went home that day, just like normal, played with our toys for the weekend, and, when Monday came around, suddenly there was no school.  They had to tell us then.

“Why is there no school today?” I asked my Mom.

“It’s Thanksgiving. It’s a holiday. There’s no school this week,” came her reply.  I was too young to know that there is always school Monday through Wednesday before Thanksgiving.

That was just fine with me. I could catch up on Bullwinkle on the black and white TV. You see, we didn’t have the internet in 1963.

But I was stymied right away. Boris and Natasha, the famous Russian spies trying to seize power on behalf of Pottsylvania (they would have to wait until the Presidential election of 2016 before succeeding), were not on the screen scheming to block Rocky and Bullwinkle.

END_OF_DOCUMENT_TOKEN_TO_BE_REPLACED

The Central Park Zoo in the mid-to-late 1960s barely resembles today’s facility.  The centerpiece, the Sea Lion Pool, which remains pretty much as it was (with the addition of plexiglass walls, so you can see the seals swimming underwater). But the rest of it, which resembled a prison for animals, has been dramatically remodeled to be the more “naturalistic” habitat seen today.

For one thing, back then you could tell when you were close to the Zoo by the strong smell of excrement. Today, the smell is gone, with one exception: the Penguin room which has a fairly strong scent of guano. Well, they do have a lot of water birds paddling around in the simulated Antarctic environment; the main attraction is their own indoor  large plexiglass pool where the aquatic acrobats can be admired while “flying” through the water.  According to the penguin keeper, they love it when the keepers “turn the rain on.”

Back in the mid-1960s, I remember a row of cells behind the Sea Lion pool, where incarcerated animals could be seen behind two rows of bars. There was a gorilla, a leopard, and several other inmates. They either sat at the bars looking out sullenly, or paced back and forth endlessly.