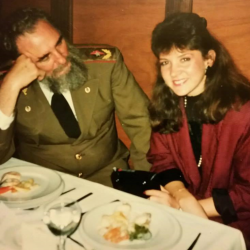 My beguiling sister Victoria, with an admirer, sometime in the late 1980s.

As related in my post “Fear and Loathing on Second Avenue,” when I returned to New York in June 1965 for summer vacation, my stepmother Graciela was no longer there.  Dad’s third marriage had collapsed, fully and fitfully, a few months previously.  Her father had broken his hip in Ecuador that January and she had raced down there to be at his side.  From her point of view, what was the point in coming back to New York?

So Graciela became yet another void in my Dad’s life, one of many.  Whether it was the missing family in Lithuania, the Einstein letter, or the mystery of wife no. 1 (the one before my Mom), these black holes of his intrigued me, beckoning me to jump in.  I was learning that my leaps inside were dazzling experiences.

As for the mystery of wife no. 3, Graciela was actually one of two voids; with her on her trip home that winter was my infant sister Victoria.  I could remember her as a swaddling babe in her crib from the year before.  Little did I know that I would not see her again for 19 years!