SOMETHING ABOUT DAD, PART 2: FREE PARKING

Above from left, my Mom, Gloria, and I.  Graduation Day at Tufts, May 1980. After everyone left the next day, I fell ill with German Measles and stayed in Somerville for a week to recover.

During Christmas break in 1979, a trip was planned to the family houseboat, which was permanently moored at the Hurricane Hole Marina, under the Paradise Island Bridge on Paradise Island in glistening Nassau, the Bahamas.  I had never been there before but had heard a lot about it from Gloria and Dad so I was looking forward to going.

A day or two before, Gloria went to the Shop Rite supermarket in less-than-glistening Union City, to shop for groceries to bring on the plane to the Bahamas.

“What?!  Bring groceries on the plane?  Are you sure we need to do this?” I asked.

She assured me that supermarkets in Nassau were both terrible and overpriced.  And this is what they had done on previous trips.  I suspected that this was my Dad’s idea but anyway she seemed to be completely on board.  I tried to imagine what a terrible supermarket looked like and immediately thought of Shop Rite.  Could it be any worse?  Besides, I was weirded out with the idea of lugging brown paper supermarket bags filled with chopped meat and such onto the plane.  This was just about the turning point when airplanes came to be thought of as buses with wings.  And board that flying bus we did, complete with our groceries from Shop Rite!

On flight day, Gloria, Addie, Blair, Dad, and I loaded ourselves in the two family Cadillacs, one blue and one brown, with our luggage and at least four stuffed brown paper bags (matching the color of the brown car).   So we set off to LaGuardia Airport to catch the charter flight to Nassau. 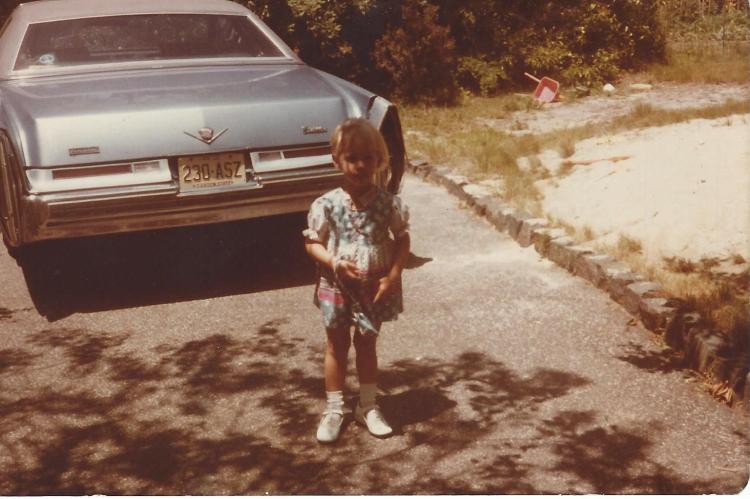 One of the Cadillacs, the blue one.  With Blair in front. Photo by Bernard Olcott.

Back in the 1960s, I had had lots of experience in flying solo back and forth between New York (Dad’s place) and Florida (Mom’s place) on my own.  It was easy.  My Mom or Dad would take me to the airport, and once they found a stranger for me to tag along with (in order to save on the unaccompanied child fee), I was home free.  The stranger would enjoy his cocktail while I would sit at the window, look at the clouds, and watch the parade of East Coast cities go by.  Easy.  Didn’t every child fly that way?  Traveling with Dad was different, however.  Extra complications were always possible, if not inevitable.  As he steered his leading Cadillac onto the highway exit, he very purposefully did not pull into the airport parking garage.  Instead, he turned towards the other side of the Grand Central Parkway and parked in an outdoor lot at the Sheraton Hotel.  Now this was intended as parking for paying guests of the hotel, not as free parking for free-loading airport travelers.  I shrugged it off as yet another innovative solution to the problem of having to pay for anything.

We lugged our luggage and groceries over the highway overpass to the terminal.  Four adults (I had just qualified as one) and one small child, each with one suitcase and one bag of groceries.  Roller bags hadn’t been invented yet so each suitcase needed to be put down after 20 feet or so and then you took a quick breather while admiring the sounds of traffic on the Grand Central Parkway below.  Thusly laden, it was a very long way to the terminal and then on to the charter flight counter for our flight to Nassau.

Once there, I had a great time, especially during the New Year’s Eve party at the casino where I met other touristas and danced to a great band with my new friends.  I also got friendly with one of the dockhands, Eugene, who took me on an unforgettable tour of the back side of Nassau.  We ended up ducking clothes lines through people’s back yards until we got to a billiard hall way down on Mackay Street, where the tourist buses NEVER go.  All of a sudden, I played pool like my life depended on it – making more than a few incredible two ball shots that simply defied physics.  Worse, I actually called ‘em before I shot ‘em.  It was a magical moment, like being able to walk through walls as a parlor trick.  After the game, the Rasta guy who had been sleeping on the floor suddenly stood up to shake my hand.

One morning, I remember Dad coming upstairs on the houseboat, looking particularly awful.  He brought up with him a radio or maybe a battery tester.  He loved to tinker with electronic gadgets, especially broken ones.  It could have been the moment to ask him about the zinger.  But it obviously hadn’t been a good night as he looked tired and haggard.  This certainly wasn’t the guy who introduced me to Gloria on light feet 9 years earlier.  I let him be and decided this wasn’t a good time. 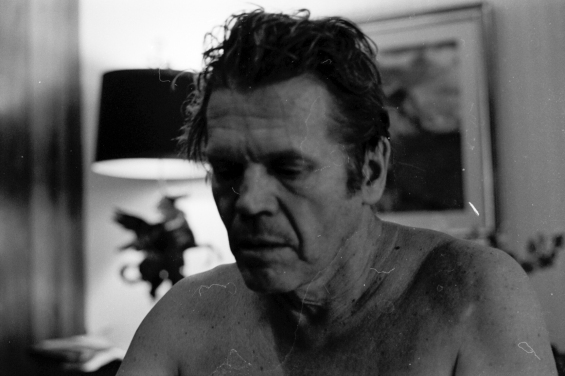 Bernard Olcott in Nassau, Bahamas, January 1980.  Photo by the Author.

The next day, Dad asked me to join him for a walk on the beach.  He pressed me about my career plans.  I told him that I was still unsure and wanted to check out both public service and private enterprise options.  He stopped short of asking me to join him at Olcott International.  Contemplating my future was unnerving, but I felt sure that I would figure it out later.

Our vacation was over and it was time to fly back, naturally we were lighter this time as there were no groceries to lug.  Our 6:00 PM departure from Nassau was delayed due to bad weather back home.  Eventually, we were cleared for take-off, but as we approached LaGuardia, we circled for a while awaiting clearance due to continuing delays.  It never came so the plane, which was low on fuel at that point, was forced to divert to Newark.  Although this was closer to Weehawken, New Jersey where my Dad’s house was, we needed to schlep back to LaGuardia to retrieve the cars.

It was a long night, about to get even longer.  It wasn’t until 12:30 AM that a bus showed up to take us back across 2 bridges to the other airport.  At least there was no traffic.  Like a bad spy exchange at Checkpoint Charlie in Berlin, we schlepped back across the overpass in the 20 degree cold, looking down at the Grand Central Parkway in the early morning darkness, and lugging suitcases.  Except there was no one going the other way of course.

When we got to the Sheraton parking lot, we saw the cars right where we left ‘em.  They just looked somewhat…lower.  Then Gloria pointed at one tire, slashed.  Then the others, the rest of them, all seven.  Shards of rubber could be seen lying on the pavement in the dark, gloom, and cold.  Maybe it was 2:30 AM when the tow trucks arrived and taxis were flagged for another hop back across 2 bridges.

I guess the parking wasn’t so free after all.

Gloria and I never discussed it.  We didn’t need to. 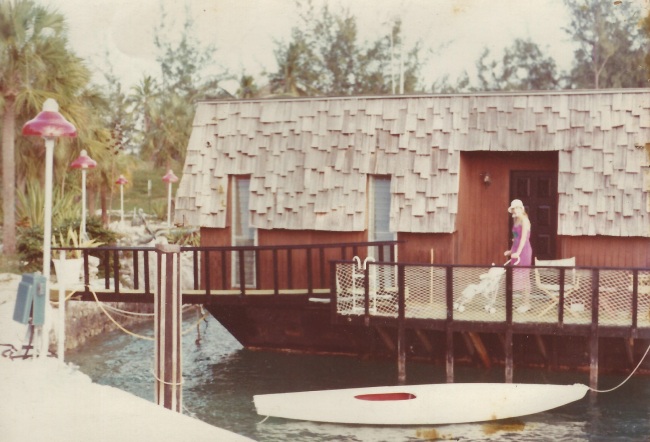 Gloria and my baby sister Blair at the houseboat in Hurricane Hole Marina, Nassau, Bahamas, January 1980.