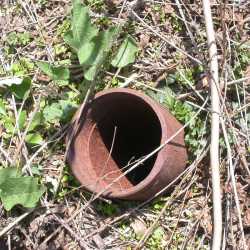 Meanwhile, back in Kansas…

After barking orders to Luke and Roy to fix whatever was wrong with the non-working pump jack, Bobby Edwards proceeded to drive me around southeastern Kansas to the other leases.  As it was a half hour to 45 minutes to any of the others, Bobby and me spent the rest of the week in the truck driving around the stark landscape.

Typically, we would arrive at some desolate farmland, turn off the paved road, and then drive around farm roads for a while, with Bobby looking here and there for familiar markers.  Occasionally, we were at risk for getting stuck in the mud in the middle of nowhere.  If the truck started to slip and spin, Bobby would mutter “cocksucker!” in his raspy voice, jam the truck into reverse, slam back into drive, and rock the truck out of the mud.  The mud, thus insulted, would always relent.  (And I survived to write the tale!)

Then, suddenly, Bobby would say, “We’re here!” put the truck in park, and lurch out of the truck.  I would study the outside, quizzically.  Just empty fields, maybe a tree line marking a boundary.  Then I would hop out and walk around the truck to see Bobby pointing downwards at a hole in the ground.  There would be an eight inch well casing or pipe extending several inches up off the ground. Looking down the casing, it would be just a dark hole running towards the center of the earth; the average depth of oil wells in this area would run maybe 1,000 feet.  Bobby would explain how, to start with, these abandoned holes had to be cleaned out due to “kids throwing stones and bottles down them.”  Once cleared and re-drilled to find the oil reservoir, only then could a pump jack and piping be set up to bring up, hopefully, as the Beverly Hillbillies would say, the “black gold.”

The extraction process had not been started for the first hole.  Nor for about 39 others.

END_OF_DOCUMENT_TOKEN_TO_BE_REPLACED

Above photo of Kansas highway courtesy of Erik Trautman.

The following Monday morning, I got up a little earlier than usual in my apartment in Yorkville, Manhattan.  I put on a pair of jeans and my Timberland boots as this here urban cowboy was going to work on the oil field for the week.  Well ok, maybe not exactly.  I was really going to be a tag-along on the oil patch.  To be on the heels of the world-famous Jewish cowboy and oil rustler, Bobby Edwards!

I grabbed a cab and directed the driver to Bobby’s place on East 86th Street.  As we pulled up to the awning on Bobby’s building, he was, of course, nowhere to be seen.  We waited as the doorman called up.  “Mr. Edwards will be right down.”  I wondered if everyone’s workweek on the oil patch started this way.

After a few moments, Bobby arrived at the car, huffing and puffing with his suitcase.  “LaGuardia Airport for TWA Airlines, please,” he barked to the driver in his raspy voice as he staggered into the cab.  We were on our way to an 8AM flight to Kansas City International Airport.  “Wait ‘til you see Kansas, kid,” he laughed and coughed.  “Looks just like 86th Street.”

Once at the Central Terminal (which, at LaGuardia, is Terminal B, not C: go figure), I followed Bobby to the check-in counter at our gate.  He slouched up against it and whipped out a money clip.  On one side were several Gold and Platinum ‘Elite’ TWA Frequent Flyer cards.  On the other side were several Benjis ($100 bills).  Bobby winked at me as he addressed the check-in agent while clicking the clip on the desk.  “Hi Linda, how are you this morning,” he said as if he had played doctor with Linda in kindergarten.

“Fine, Mr. Edwards.  How are you?” she said pleasantly if nonchalantly as the printer spat out two boarding passes.  After handing him our seat assignments, we soon took our coach places towards the rear of the empty aircraft.