BOOMERANG IN THE AIR FROZEN

This blog ostensibly concerns my Father, Bernard, who passed away in 2006.  But I take many diversions along the way.  Today’s post is mostly about his 2nd wife, my Mom.  She is a spry 83 year old woman who brags about her ability to walk around the parking lot in front of her Assisted Living Residence “23 times” every day.  She is very specific about that number.

OK, so what do you do with your aging Mother when you bring her home for the weekend?  In my case, I take her for long walks.  Makes sense, right?

This past Sunday, I brought her and my cousin, Lise (visiting from Quebec City), for an excursion to the Four Freedoms Park on Roosevelt Island.  It’s a stunning modern memorial to, in my opinion, the greatest President of our Republic.  Our very own Great Leader, the handicapped patrician who led our country through its darkest hour to supreme victory and ascendancy to superpower status, militarily, economically, and culturally.  FDR.  Now we have a Washington, DC-style monument in his honor, right here in the middle of the East River.

Franklin Delano Roosevelt was President when my Mother was a child in Quebec City.  When I asked her if she remembered him, she was very quick to assure me, yes, that she did.  Then, as we admired the Manhattan skyline with the likes of the UN, Chrysler, Empire State, and the new supertall “matchstick” (which she wouldn’t recognize) buildings towering over the East River, she repeatedly claimed that she had never seen “Quebec City” so pretty.  This was after she had asked me for the 20th time that morning when I was going to take her back to Quebec to see her brother. 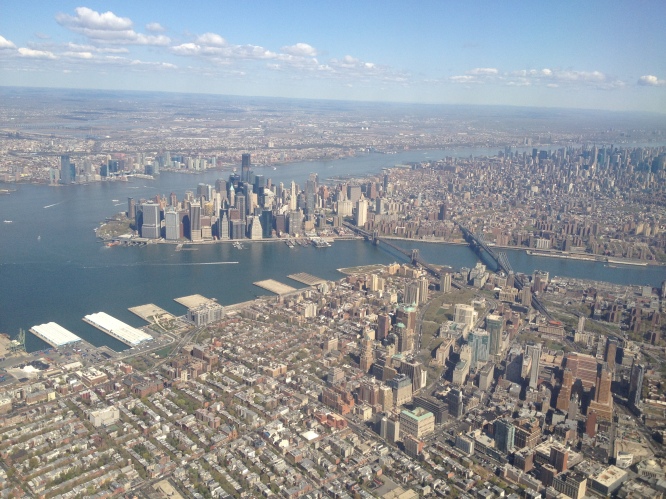 From the air: New York City and Quebec City.  Photos courtesy of the author.

And even though she had changed Lise’s diapers as a babysitter’s helper 70 years ago, she repeatedly asked Lise for her name and was surprised to learn every time that it was the very same Lise who accompanied us this brilliant sunny morning.

As we walked back and forth from the tramway station, Mom would stop every 5 minutes to admire a dress in a storefront, ask an owner about her doggy, ask me about a new building of which I invariably knew little, or compliment a passersby for her scarf.  Often, I found that Lise and I were walking along by ourselves with my Mom straggling well behind us and engaged in conversation with a stranger.  Everything was new to my Mom, a woman of many years.

Although mentally fatigued with the repetitive questions, I knew that I was having a glimpse of my elderly mother as a small child.  Although her short-term memory may be worn out, her long-term memory could periodically inform her awareness, on an immediate basis.

For example, a new memory popped up over the weekend – of her own Mom (my Grandmother) coming to visit her in boarding school years ago.  I can visualize this scene clearly.  “Ah, Cherie!!!,” my Grandmother would screech over the other families in the school’s waiting room.  My Mom remembers inwardly groaning “Shit!” in embarrassment and mentally diving under a table to avoid being the center of an over-dramatized spectacle.  What made matters worse was my Mom’s feeling of being dumped in boarding school in the first place.

What I also saw is that her long-term memory manifests itself in reminiscences of other core family members, in particular her brother, my Uncle.  She misses him.  Constantly.

I brought her up to Quebec City in September 2014 to visit him.  The only problem was that George (not his real name) was thoroughly preoccupied with his own wife who had completely succumbed to the worst form of Alzheimer’s.  Claudette (not her real name) is so confused that she is a flight risk and needs to be confined to what is called a “lock-down unit.”  George, of good heart, is completely devoted to her and insists on bringing her everywhere (which is useless because the poor woman has no idea where she is and only experiences discomforts of various types).

One evening, we all dined together, George, Claudette (who stared vacantly at my Mom all night), Lise, my Mom, and I.  It was a noisy restaurant and hard to hear across the table.  My Uncle dutifully attended to the many needs of Claudette.  My Mom unfortunately felt neglected by her brother that night.  George is important to her; he is one of the few things she can remember.

Those who suffer from dementia are often very quick to perceive slights that aren’t there.

When Lise, Mom, and I returned to Lise’s apartment that night, my Mom suffered a catastrophic reaction and raged against George, her entire family, Lise, me, and even you — yes, you! — the dear reader.  Eventually, using soothing voices, we put Mom to bed.

And the next morning she had no recollection of it.  In fact, she doesn’t remember the trip in its entirety!

So let’s bring this back to the Bernard Olcott Story.  What’s the point in looking at my Father (and Mother)?  Perhaps you can compare to your own experiences as children of vulnerable parents, or to others that do.

In my opinion, trying to holistically comprehend them goes way beyond the Biblical admonition to “honor (and love) thy parents.”  By making sense of them, we can better come to choose what we like or dislike about them.  The payoff to us, as individuals, is that we enable ourselves to more easily adopt what we like best – picking their very best qualities.  And discarding the rest psychically.  Spiritual evolution, as it were.

At their best, different generations should be in a mutual appreciation society.  At worst, the relationship (or the lack of one) can be the cause for much pain and sorrow.

A few days ago my high school classmate, David Teeple, called me on the phone to chat about our upcoming high school reunion.  He said something to me that reminded me of the reasoning above.  As he expressed it:

“… as I age and evolve as an artist, critical aspects of my work are coming together in clarity and breadth. With the affection that I have for my parents, I have a desire that they live long into their nineties or beyond, so I can share with them the artworks and projects which are in various stages of coming to life.”

I think we all want to share our Masterpieces with those who fought for us, cared for us, and shined with us.

We want to admire our folks.  And to be admired by them.

Sometimes, though, it cannot happen.  And truthfully, no one is at fault.  What if dementia rears its ugly head in the person of your parent?  This illness robs you of the person you knew.  50 years later, your Father or Mother may look the same, talk the same, and walk the same.  But they aren’t.  It’s a real life invasion of the body snatchers.

By the time I went to Lithuania in 1985, I had already been introduced by my Father to industry colleagues as his Vice President who every day “moved his (my Dad’s) desk closer and closer to the door.”  In other words, I was conspiring to get rid of him.  I suppose it was funny the first time I heard it.  But after the 3rd and 4th rendition, it got old and left me feel extremely pained and awkward.  To be sure, I wanted to fulfill his ambitions (which I shared) to “take over the business” in some gilt-edged future.  But let’s be really clear here – 1985 was the beginning of my career at Olcott International and I depended on him to be my guide, teacher, and mentor.  Even if he moved his own desk closer to the door, I would have bolted it shut to prevent him from leaving.

So after the 5th time this joke came up, I pulled him aside and told him how weird I felt every time he made that remark.  I asked him not to tell it anymore, and to my surprise he readily agreed.  It was a good discussion.  I wish that I had had more like that.

However, as the years progressed, Dad became more and more prone to catastrophic reactions.

There is however one thing worse than the body snatcher of dementia stealing the heart and soul of your parent.  And this gets into the cautionary tale part of this blog.

As your parent becomes more susceptible to quarrels and catastrophic reactions, some simple minded persons may observe these, and, oddly enough, have the wooden sense to sometimes blame you for an inability to resolve what they imagine is a dispute between two reasonable sides. 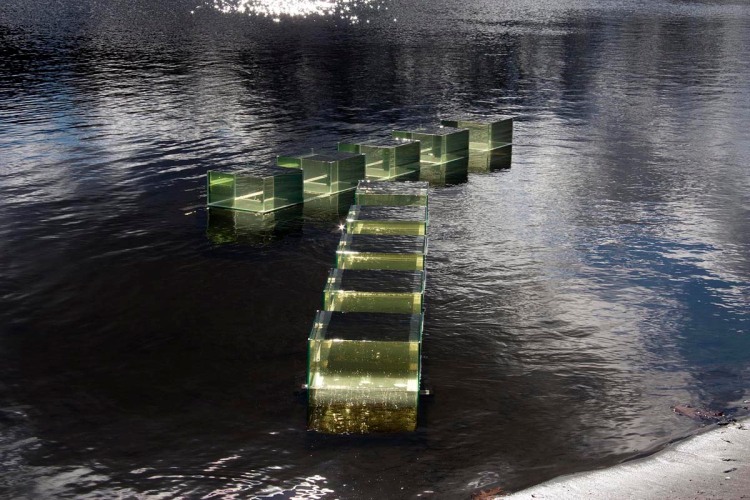