In the summer of 1966, I lived with Dad as an 8 year old in his temporary home in Morrisville, Pennsylvania. Sort of like today where I am a transient resident of nearby Reading (except now, I am seriously older than 8!)  Forget about the famous railroad company from ‘Monopoly,’ the Reading Railroad was closed years ago.

For whatever reason, I just keep coming back to the Keystone State.

One morning that year, I woke up to find, not to my surprise, that Dad had already been awake for several hours. This wasn’t unusual for him. He had bought some kind of model kit the day before for a pocket watch made out of hard blue plastic. Early that morning, while I was snoozing away, he had painstakingly detached all the pieces from the molds.

Then, carefully and slowly, Dad followed the detailed instructions to assemble the watch. All parts were made in the aforementioned blue plastic: the sprockets, cogs, case, the hour and minute hands, everything save for the spring and the clear transparent plastic cover that snapped into place over the clock face. 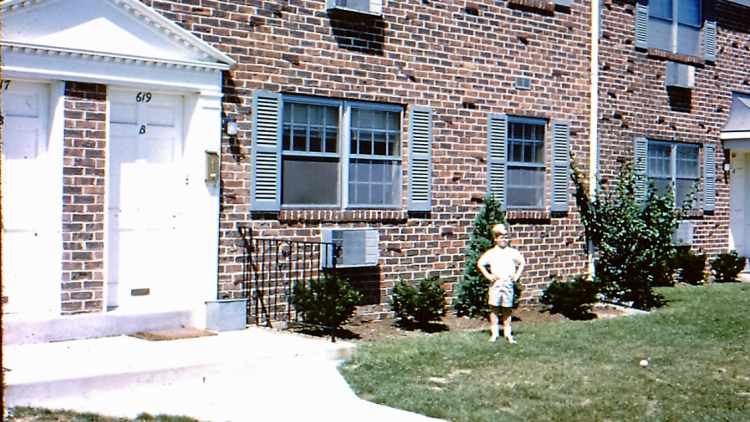 At home in Morrisville, Pennsylvania, August 1966.

As I got out of bed, I watched him complete his labor, with plastic parts and instructions strewn across the tabletop. Expectantly, he wound up the 2½ inch timepiece using a thumb dial on the back and triumphantly gave it to me. I examined the watch carefully and held it up to my ear. Hearing no ticking, even after a few gentle shakes, I gave it back to him.

Dad held it up to his ear and listened intently. He tried turning the knob some more, but soon the dial was wound up to the max and would not turn any more. After a few minutes, it was apparent that the timepiece would tell time only twice a day.

I thought nothing of it and marched over to the black and white television set with a box of Quisp cereal.

Quisp Cereal “competed” against Quake.  Since I wanted to ride in flying saucers, the choice was a drop-kick for me.

Dad’s TV had an odd plastic sheet hanging over the screen – it was colored blue on top, pale yellow in the middle, and green on the bottom. This was a mid-1960s low-tech substitute for color television.

For a great description of Instant Color TV Screens, go to: https://trulyskrumptious.wordpress.com/2012/11/29/instant-color-tv-screen/

I can’t say that it really worked, other than that everyone in TV Land was transformed into wearing suits in barfy colors and styling blue hair. In any event, it was good preparation for the future!  Did I ever mention that my Dad really, really liked cheap alternatives?

Ignoring the color sheet, I rearranged the rabbit ears on top of the idiot box in a vain attempt to improve the reception of stations from distant Philadelphia as New York was too far away. You have to keep in mind that roof-mounted television aerial antennas were also expensive, especially if you were planning on moving again soon. Flipping dutifully through the channels, most of them were snow and static, except for channels like 3, 6, and 10 (odd channels, all, at least from a New York TV perspective).

Anyway, Dad shouldn’t have felt badly.  I was similarly unsuccessful in pulling down my favorite TV programs like ‘Wonderama,’ ‘The Sandy Becker Show,’ or ‘Superman.’  Look, I was handicapped!

Sandy Becker was the man!

Dad was undaunted by the failure of the plastic pocket watch. The next day, he bought a brand new kit, probably from some hobby store near Grand Central Station. Again, while I slept, he woke up extra early and went at it again. This time, he resolved not to touch any of the pieces with his bare hands. Using tweezers, he detached all the parts and then painstakingly fit everything together. When I woke up, he handed me a working pocket watch. He beamed like my Grandfather presenting me a five dollar bill. I remember treasuring this ticker for a few years until it disappeared as do most childhood heirlooms of little value that are nevertheless priceless.  I wish I could hold it in my hands right now.

Fast forward to 1994.  Yoshi, the Olcott International keeper of the mainframe, taught me a couple of things, too. Most of which, thankfully, had nothing to do with life in the big house. Probably his greatest lesson to me – aside from sticking up for myself – had to do with computers and the joy of assembling things.

1994, as my older readers may recall, was the mid-morning of the Personal Computer age. The dawning could be said to have occurred some 11 years earlier when TIME magazine had named the PC, “Machine of the Year.” By the mid-1990s, like color TVs thirty years hence, these were no longer novelties, but had become ubiquitous, in both office and home.

For its part, Olcott International had been slow to adapt, but in the end, was no exception.

Of course, not everyone welcomed the modern age of computing. During this period, for example, Ted Kaczynski, the Unabomber, was aghast to discover ever encroaching real estate and infrastructure development upon his rustic off-the-grid cabin in remote Montana. Unlike potato famers on the South Fork of New York’s Long Island, Ted decided he wasn’t gonna sell his lot for $1.2 million and move further upstream.

No, Ted took it to the man by delivering bombs to the most blatant personifications, in his opinion, of the aforementioned development via the US Postal Service.  Seeking names in Who’s Who, Kaczynski injured dozens and killed three.

Dad was listed in that book; he loved his listing there.  In hindsight, he could well have ended up on the Unabomber’s mailing list. How could Ted have known that my Dad was resisting, in his own way, the advent of the PC age as well?