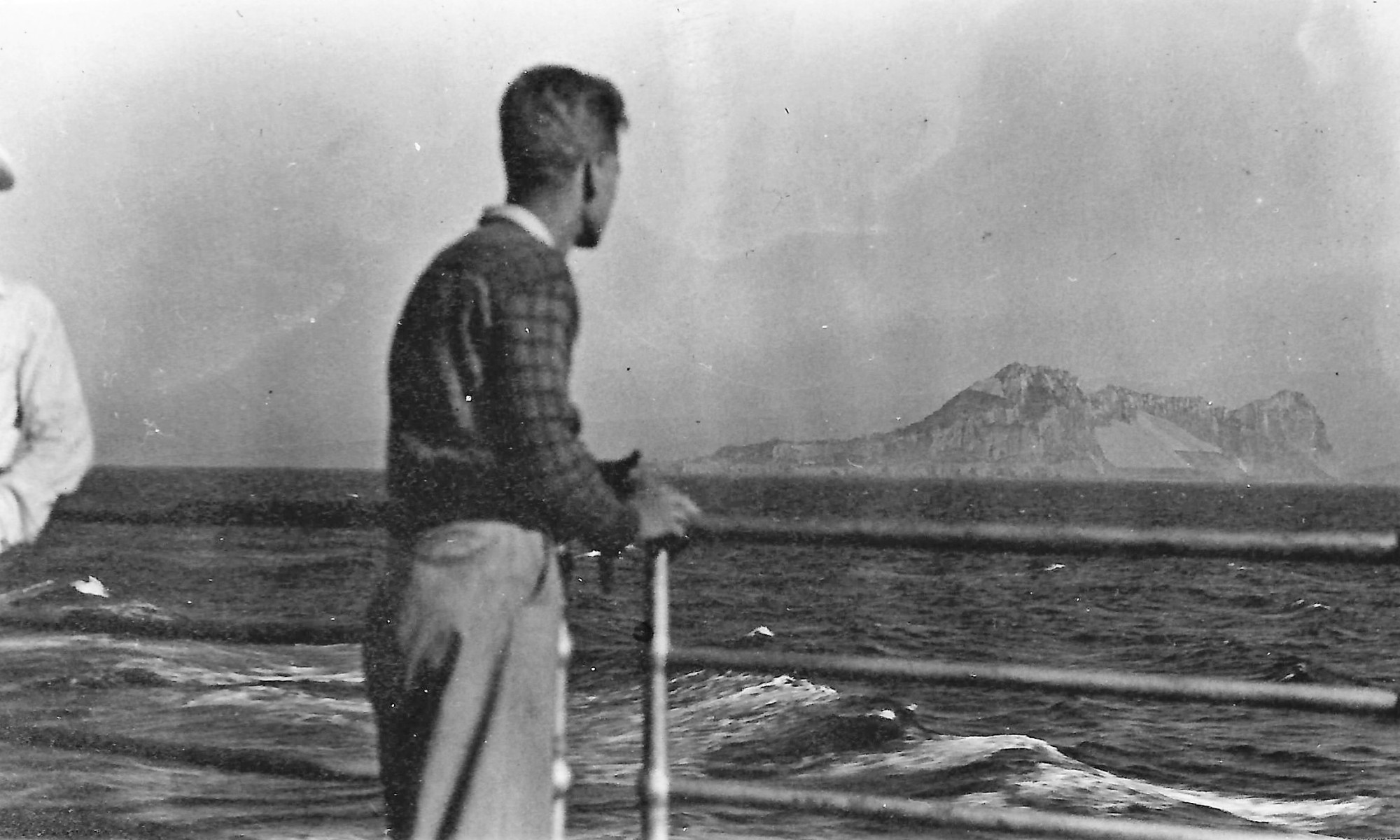 Yup, this is a repeat. But it sets the stage for my new story THE FINEST ESCAPE, PART 2 due next week.

The Bernard Olcott Story started off 2016 with a rewrite of my post “THE LOST WEEKEND” focusing on the Academy Award (and Cannes!) winning movie of the same name from 1946.  That post promised the following stories to come:

• the biggest movie of 1946 (THE LOST WEEKEND),
• the 3rd Avenue El (including an art house film),
• old style New Yorkers interacting in flavorful accents,
• a valuable lesson at Cooper Union
• a mysterious death in 1943 with what little facts are available, and
• a color-filled present with a shared activity across time.

All have been delivered, except for the last topic.  I did leave the 1940s to take you, the dear reader, on a color-filled ride 40 years later to Lithuania in 1985.  I framed my trip in terms of a Boomerang where I realized that my journey, as an effort to strengthen family ties, may have inadvertently reminded my Dad of his disadvantaged youth.  Both in terms of society – his immigrant household subject to prejudice – and family – where his brother was favored in the household.

But wait!  There’s more to that technicolor present!  Today’s post will wrap up both the Boomerang and 1940s themes with the following conclusion: my Dad escaped his unhappy situation 4 ways:

1. Becoming a sailor on the Merchant Marines and shipping off to Europe
2. Flying the coop to Cooper Union
3. Becoming a Technology Consultant
4. By engaging in a mystery activity (identified below), one that he and I both share.

When I originally wrote my first “THE LOST WEEKEND” post last summer, I based it on that amusing picture of Dad, his date, and two other couples yucking it up in front of a camera.  I knew nothing about the background of the picture, the significance of the caption “The Lost Weekend,” or who the others are.  Eventually, I was able to get the general idea with some good specifics.

Since then, I have written expansively about the 1940s using that image as a point of departure – seminal years for my Dad as a recent graduate from Cooper Union, armed with a lesson about Quality Assurance/Quality Control (“QA/QC”) that was to give him a competitive advantage when he launched a new industry some 20 years hence.

After graduating Jamaica High School in 1937, Dad wanted to (as my son put it at the age of 8), “break out of North America.”  How can you spend the summer in Europe on someone else’s nickel?  Well, easy, you join the Merchant Marines.  It was his first escape and he never really turned back. 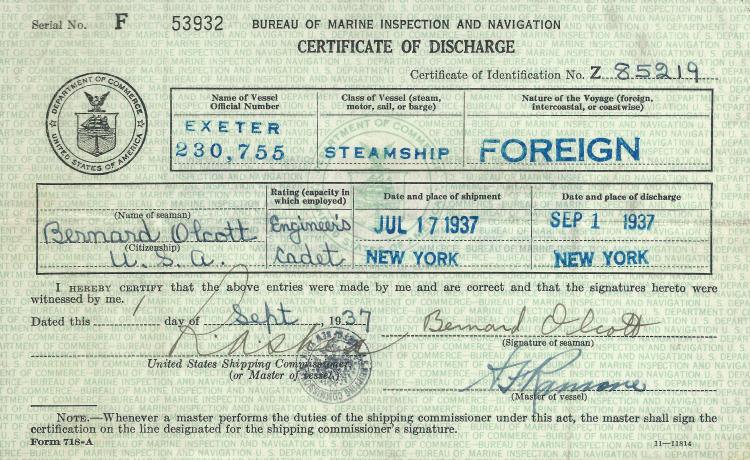 The United States Merchant Marines is essentially a peacetime worldwide cargo operation.  You enlist, get assigned to a ship, and off you go.  Dad got assigned to a deep sea cargo ship, the SS Exeter, bound for the Mediterranean in July 1937.

It was a great way to spend the summer – getting paid to cross the ocean with ports of call like Marseilles, Naples, Alexandria, and Jaffa (today called Haifa).  The pictures from this voyage show a young man killing it in Europe (and Africa and Asia).  Riding camels, yo! 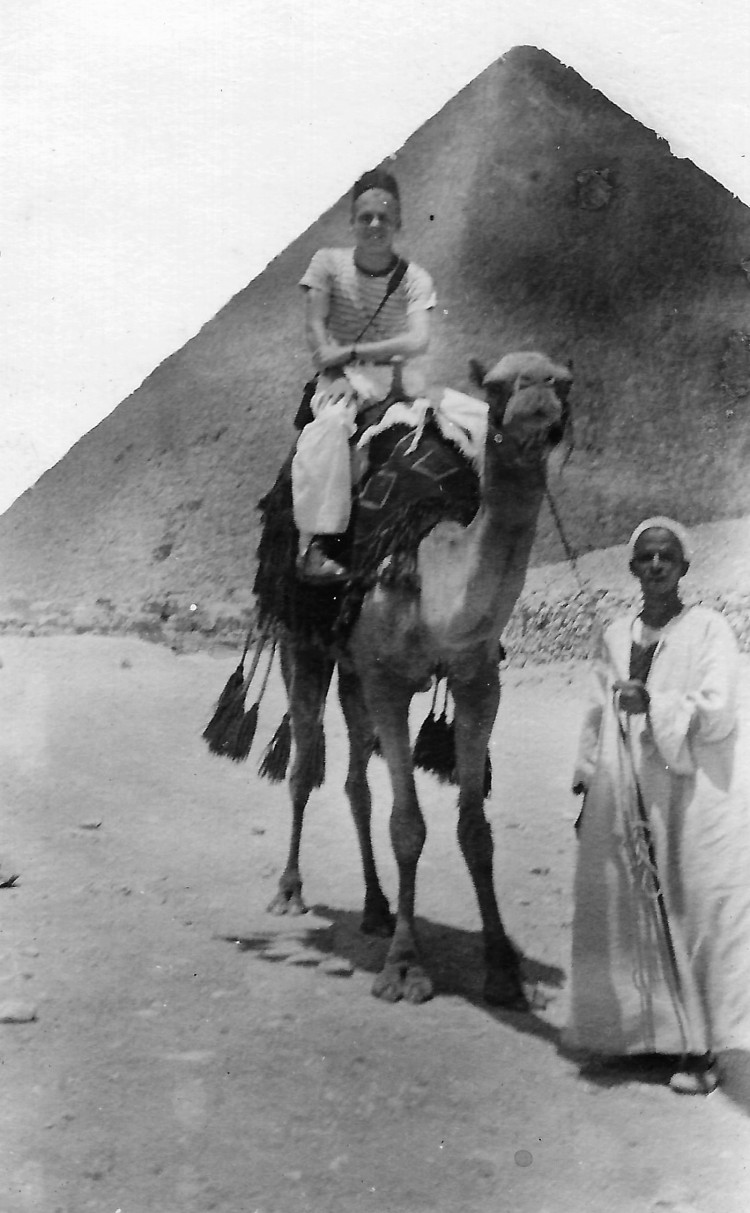 My Dad in a fez at the Pyramids in Giza.  Photo courtesy of Bernard Olcott. 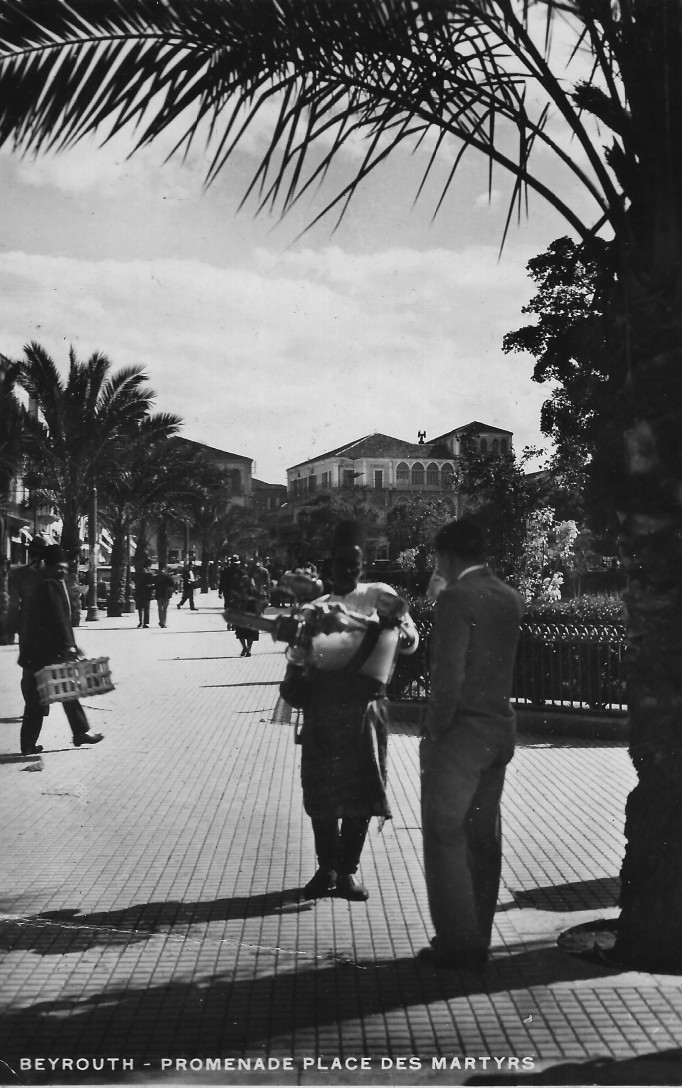 Postcard from Beirut, Front Side, August 1937.

Postcard from Beirut, Back Side.  Addressed to Mr. Michael Olcott and “Dear Folks.”

On his return that Fall, Dad was, compared to his peers, a worldly lad.  As a first year student at Cooper Union, he was often known for bending the ears of his classmates with endless stories about his trip to pre-war Europe.

Thereafter, the Jamaica elevated line (please see my post “THE LOST LINE, PART 1“) provided his second escape by way of daily transportation from home to school.  He didn’t talk much about his time in college to me, but every once in a while he broke out in an entertaining thick Scottish brogue.  As Prof. Jimmie Coull’s Scottish accent was specifically mentioned in his yearbook, I wouldn’t be surprised if this is where he picked up that shtick!

That was not the only lesson he learned in college, of course.  In addition to his academic major of Electrical Engineering, he was the President and Varsity Letterman of the Rifle Team:

Riflery was one college activity he would tell me about.  According to the 1939 Cable Yearbook for Cooper Union, Dad campaigned for a convenient Riflery range to serve as home base for the school team.  Somehow the paperwork he submitted to the Student Council the summer before his last year was “lost” in September.  However, “after some adjustments, the [Rifle] Team received money for a range.” 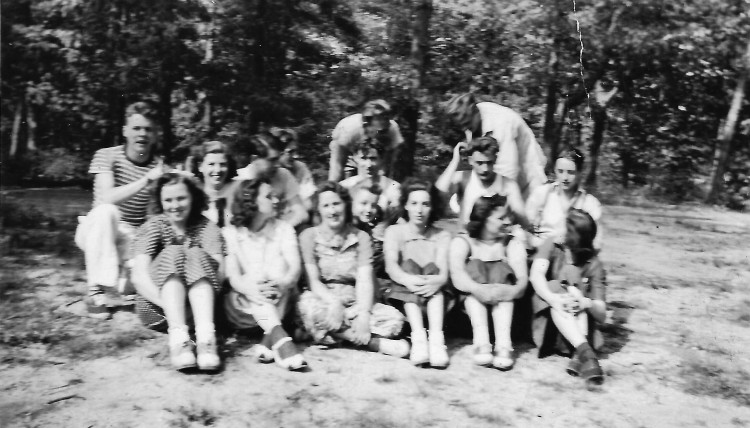 Graduation day was June 8, 1939, the end of the two year program.  Degrees were conferred by President Gano Dunn who compared the Engineering degree with the Baccalaureate as a “molded anchor, stamped with the seal of Cooper Union.  Not every anchor,” he added, “will withstand the test of severe storms.”  According to the yearbook, “after many congratulations and introductions of instructors to families, the graduates left with a new determination to begin, and begin correctly, their new future work.”

Having been President of the Rifle Team in the class of 1939 turned out to be fortuitous.  First of all, there was a World War going on and young men handy with guns were in great demand.  Dad did his initial service and training at Fort Dix and then had a great run as a Signal Corps Lieutenant, serving as a specialized electrical engineering consultant for military-related industry from Washington, DC to Boston, MA.  These series of consulting gigs were his third escape.  This is how he met Hazard E. Reeves, his future mentor.

In addition to Riflery, Dad was a great fencer.  Of all the sports featured in this post, fencing was the only sport I personally witnessed.  His office in the Pan Am Building (and, later on, in Weehawken) was decorated with fencing prints.  I remember him showing off his lunge and parry at the New York Athletic Club in the 1960s.

As he built a career for himself as a Technology Consultant, he found a new activity, his fourth escape.

One day during Christmas week in 1972, I went with Dad and Gloria to the Great Gorge Ski Area (now called Mountain Creek) near McAfee, New Jersey on a beautiful winter’s day.  It was to be my first day of skiing ever.  Bunny slope (at the Playboy Club), watch out!  I was thrilled!  After getting outfitted in my snow overalls, unfortunately, something happened and Dad and Gloria suddenly lost interest.  I had to wait 27 years before my first real day on the slopes — not with Dad, but with his granddaughter (my daughter).

After I learned how to parallel and tell stories to other people on the chairlift (sometimes causing them to jump off), he took an interest in the early 2000s and even asked if he could join me one weekend at Hunter Mountain.  Sure, I said eagerly.  But again oddly, somehow, he changed his mind and bailed.  I regret that I never had a chance to ski with him.  I ski all I can with his granddaughter and grandson.

Years later, after his passing, I went through his pictures and to my surprise found this gem:

Then I found this postcard — front: 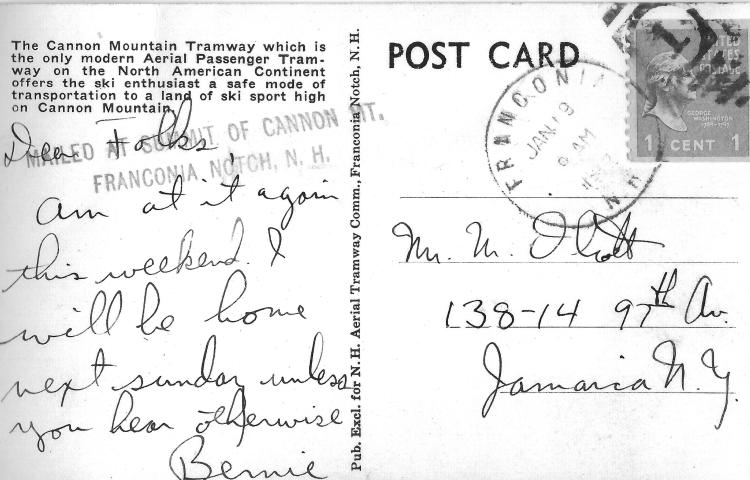 “Dear Folks, Am at it again this weekend. I will be home next Sunday unless you hear otherwise.  Bernie”

Now that is written by a true skier!

The Franconia Notch ski area is known today as Cannon Mountain.  It is a breathtakingly beautiful site in the White Mountains of northern New Hampshire.  Cannon is notable for being one of the few ski resorts in North America with a tram (the one in the postcard has since been replaced with completely modern equipment).  I skied there a few times with Dad’s Granddaughter who went to high school up there (and was a Varsity letterman on the school ski team).

Skiing is something I understand.  I know why Dad skied.  Here’s a picture I took from the summit of Cannon Mountain in January 2013.

I am sure Dad saw this very same sight.  On a bluebird day in 1942 similar to one pictured above, the snow was as blue as the sky and I know that he skied in the clouds. 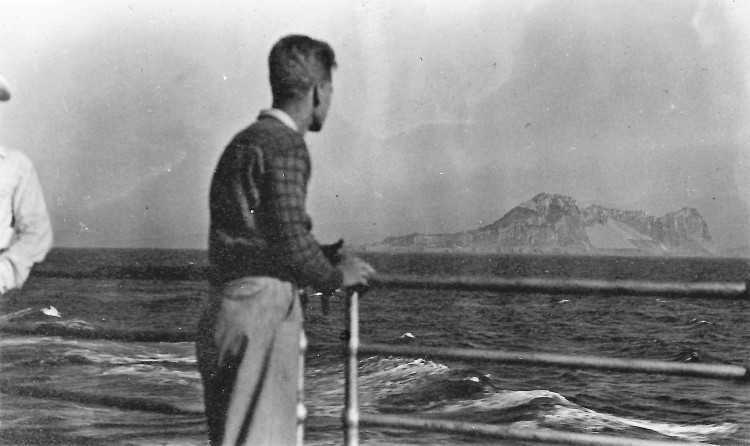 Dad passing the Rock of Gibraltar.  From Queens to Club Med.  Escape 1 (of many).