I continue from last week’s post FLIGHTS OF FANCY, PART 1 with Bill’s very unexpected description of my Grandmother, Margaux Alain, at work in her salon.  Notice the use of the Prussian Frau Landlady as a foil:

The French dressmaker was a constant revelation to Frau Landlady. In the coldest days of winter, the dressmaker would be bitching up a storm about the lack of heat when the landlady would come tramping down the stairs lit by a fifteen-watt bulb, her body covered with heavy wooly underwear and layers of sweaters, bearing a huge thermometer in her fist to prove to the French madame that there was ample heat. When the landlady would tap at the door, she always got the shock of her life to find the French madame running around on ten-degree-cold days with just a bra and panties. She couldn’t design fully clothed; she found inspiration only flowed to her fingers when she was almost naked. Of course, the landlady would hit the ceiling, wildly screaming, scaring my customers out of their wits.

I remember my Grandmother at her sewing machine, cigarette in mouth, wearing a bathrobe with, I guess, nothing else on but just a bra and panties. Now I know that she didn’t bother to wear that bathrobe when I wasn’t around.

END_OF_DOCUMENT_TOKEN_TO_BE_REPLACED 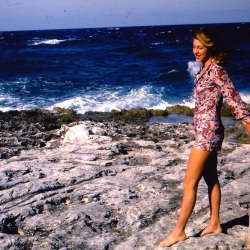 Today, my x-rated repeat from 2 years ago about Dad’s 4th wife.  She was a beauty!  Her Mom (my Step-Grandmother, as it were) was also blessed with much largesse; this included a sense of humor.  Once at the Christmas table, she told a story about how she had changed her shirt and brassiere in front of a neighbor’s 4 year old boy.  She thought nothing of it; he was very young.  “Addie,” the boy exclaimed, wide-eyed, “you have TITS!”  Addie wasn’t able to stop giggling after recounting that tale.  To tell ya the truth, neither could I.  Enjoy!  Over 18 only, please.

As explained in my post SURPRISE!!!, gosh was I ever!  A new step-mom.  I didn’t really get too anxious about meeting my new step-mom because I didn’t have time – it was to be in 3 days!  Her clothes were in the closet.  She had already traveled with Dad to Brazil and Japan.  Silk wedding gowns adorned the walls.

So Gloria joined our small Olcott nuclear family.  This meant that whenever we went out for a road trip, which was often – and something I continue to do to this day between Québec and North Carolina – I had the pleasure of her company in the car.  Gloria was an excellent conversationalist.  And we tested each other right away. 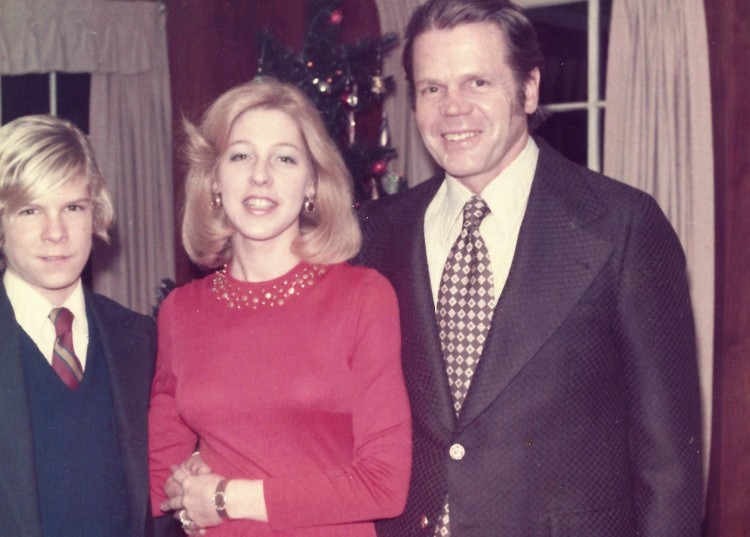 The author, Gloria, and Dad.  Photo by Addie Lundberg.

Something else was new for me.  Up until the Gloria years, I came back to New York City region only during summers.  In December 1971, I hopped a plane to come up North for my first snowy Christmas since 1961.  Ten years for a 13 year old is a long time; I had forgotten what snow looked and felt like, in its various forms.

END_OF_DOCUMENT_TOKEN_TO_BE_REPLACED

Part 2 of the “SOMETHING ABOUT DAD” series.  Continues from last week.

During Christmas break in 1979, a trip was planned to the family houseboat, which was permanently moored at the Hurricane Hole Marina, under the Paradise Island Bridge on Paradise Island in glistening Nassau, the Bahamas.  I had never been there before but had heard a lot about it from Gloria and Dad so I was looking forward to going.

A day or two before, Gloria went to the Shop Rite supermarket in less-than-glistening Union City, to shop for groceries to bring on the plane to the Bahamas.

“What?!  Bring groceries on the plane?  Are you sure we need to do this?” I asked.

She assured me that supermarkets in Nassau were both terrible and overpriced.  And this is what they had done on previous trips.  I suspected that this was my Dad’s idea but anyway she seemed to be completely on board.  I tried to imagine what a terrible supermarket looked like and immediately thought of Shop Rite.  Could it be any worse?  Besides, I was weirded out with the idea of lugging brown paper supermarket bags filled with chopped meat and such onto the plane.  This was just about the turning point when airplanes came to be thought of as buses with wings.  And board that flying bus we did, complete with our groceries from Shop Rite!

END_OF_DOCUMENT_TOKEN_TO_BE_REPLACED

Today, another repeat for you.  You can also find this way down at the bottom of my home page, if you care to scroll all the way down.  It’s a two part series about how I could no longer deny that there really was “something” about my Dad that was, well, peculiar.

1979 and 1980 were seminal years.  I was a senior in college and it was time to contemplate a career.  Of course, I had no idea what it was I wanted to do.  My roommate Dan, on the other hand, was feverishly interviewing at Goldman Sachs and other Wall Street firms.  He ultimately scored a great job and is now in charge of some place like Europe.  But for me, all I knew is that I wanted “something international” but was undecided between the public service arena (like the Foreign Service or the United Nations) or international business (I would land my dream internship at United Nations within 2 years to try it out).  My Dad had made many off-handed remarks to people over the years that I was to join him at Olcott International and “take it over.”  I think I was 6 the first time he said that to someone in my presence.  So I had grown up with this as a possible notion.  But now at 21 years of age, I was suddenly ambivalent.  There was something peculiar about Dad.

Over the last few years, things had changed between my Dad and his 4th wife Gloria.  When I first met Gloria in 1971, I was 13.  I was hardly mature but I could tell that they seemed to be happy together and the Olcott household was a cheerful one.  Gloria was funny, with it, traveled with Dad to Brazil and Japan, and even wrote me a poem for my 14th birthday, dedicated to me as the “stalwart lad.”  On top of that, they left me a stash of Playboys in my bedroom, though Gloria removed certain issues she felt were too racy.  It certainly seemed that just maybe Dad had turned a corner from 3 failed marriages and that the future was going to be more stable.  Hope had sprung eternal.  After all, Hope was Gloria’s middle name.

END_OF_DOCUMENT_TOKEN_TO_BE_REPLACED 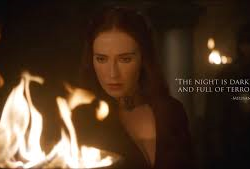 “What did he fear? It was not fear or dread. It was a nothing that he knew too well. It was all a nothing and a man was nothing too. It was only that and light was all it needed and a certain cleanness and order. Some lived in it and never felt it but he knew it was already nada y pues nada y pues nada. Our nada who art in nada, nada be thy name thy kingdom nada thy will be nada in nada as it is in nada. Give us this nada our daily nada and nada us our nada as we nada our nadas and nada us not into nada but deliver us from nada; pues nada. Hail nothing full of nothing, nothing is with thee.”

In 1982, Dad was suing Gloria for divorce.  Or more accurately, he forced her to sue him.  As the defendant, he and his lawyers threatened her with an illegal prior divorce and effectively slaughtered her (see my post last week “IS YOUR MEXICAN DIVORCE LEGAL?”).

During that Fall, I started working at Olcott International part-time, one day a week, on Fridays, when I had no classes at Columbia University’s Graduate School of International Affairs (SIA).  It was the last in a string of temporary or part-time jobs held down since my last year of college in 1980.

As a college senior, I created a job for myself as an organizer for Teddy Kennedy’s presidential campaign in 1979 and 1980.  Teddy didn’t win, as you recall.  Then, I worked as the New York State College Coordinator for John Anderson’s Presidential campaign in the Fall of 1980.  John didn’t win either.  Later on, at SIA, I had summer jobs at Société Générale and the United Nations.  Great experiences all.

The highlight of my experience in John’s campaign was when he took the time to call me one day to thank me for my efforts.

But now Dad had offered me full-time employment at Olcott International starting January 1983.  This was to be my first time working in a job for a paycheck.  To be supporting myself like a real person.

As mentioned in previous posts, I had my reasons to be nervous.  The puffed-up title of Assistant Vice President did little to assuage my concerns.

END_OF_DOCUMENT_TOKEN_TO_BE_REPLACED

Above: A beautiful view of Cuidad Juárez from El Paso earlier this week.  Photo by DLynne Morin.

By mid-1982, Dad’s marriage with Gloria had devolved into crass posturing for litigation in a divorce action.  After all, he had plenty of experience as he had been through this experience three times already.

The first had been 32 years earlier, in 1950.  His newly wed wife, Pat, returned home one evening to their Beekman Place neighborhood apartment.  As soon as she walked in, Bern hung up the phone.  “Who are you on the phone with, Dear?” she asked.  Oddly, Dad declined to say.  It took her a while to find out and it turned out to be her former best friend Connie Richards.   Pat had the marriage annulled within a few weeks via an expedited petition direct to the Vatican.

Dad never told me anything about his marriage with Pat.  Or Connie Richards, for that matter.  I had to find Pat 60 years later to ask her personally.  Remember, she was wife number one and my Mom was only the second.  Does that make Pat a stepmother?  The English language does not have a term to describe our relationship.

In any event, Pat was very annoyed with Bern (and went on to marry four more times herself).

END_OF_DOCUMENT_TOKEN_TO_BE_REPLACED

A reader commented last week “James, you had a very difficult childhood/teenage. Your father obviously had some issues.”

I disagree with the first statement.  Leaving aside the fact that my Dad had divorced and remarried twice by the time I reached my 18th birthday, I think my childhood was often charmed, even privileged.  As you can see from my picture in last week’s post “WHEN A CHORE IS NOT A CHORE PART 2,” Dad and I had a lot of fun together.

The Father who took that picture is the man I miss terribly today.

It was only in my later adolescence that ominous signs about Dad became known to me from the new vibrant presence in our lives, Gloria.  Like any child, I refused to believe at first that my Dad could have had issues.