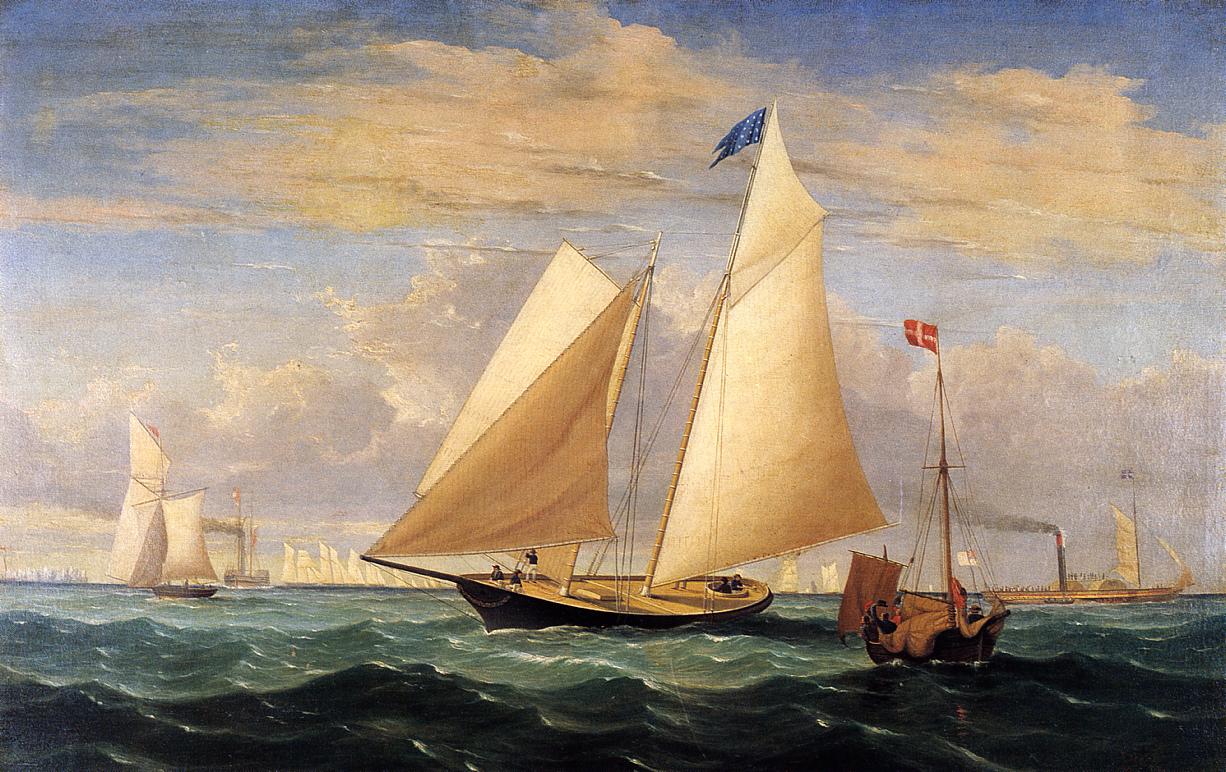 The America’s Cup is the world’s oldest sporting trophy.  The New York Yacht Club won the race 25 times in a row, from 1851 to 1983, the longest winning streak in history.  The trophy itself used to be on display in the dining room below that is also crafted to resemble a ship’s galley.  Now the spot sits forlornly empty.  Club folklore has it that if the cup is ever lost, the skipper responsible would be skinned to furnish material for a large drum to be beat before every meal.¹

The race is held at irregular intervals, whenever a qualified yacht club – one that meets the specifications in the ruling “Deed of Gift” (as amended numerous times) – issues a challenge to the club holding the cup.  The last race, in 2013, pitted the Royal New Zealand Yacht Squadron against the defender, the Golden Gate Yacht Club, who won narrowly 9-8.  At least the Cup is back home in the country that gives its name to the trophy.

The rules governing the race in the aforementioned “Deed of Gift” are voluminous and provide ample opportunity for chicanery in the truest American can-do entrepreneurial fashion.  Generally speaking, if it ain’t specifically outlawed, you are allowed to store your data on any server of your choice.²  Wait a minute, let me correct that.  I mean, you are free to stretch any interpretation to gain whatever advantage can be teased out of wind, sail, and draft.  Each model in the room chronicles the evolution of the regulations for each of the past competitions.

Dad knew the minutiae for each and every race from the 1850s onwards.  If you accompanied him to the clubhouse as his guest, upon entering he would typically grab your left elbow, drag you over to the model room without asking, and launch straight into the tour of each race, starting at the beginning.  You didn’t know it just yet, but you were embarking on a 45 minute lecture on racing theory and sailing history!

At each exhibit of defender and challenger, he would identify the deciding factor in favor of the winner, point it out if visible, and, as applicable, explain the creative interpretation of the rules that accrued an unequal advantage for the American sloop.

This Model Room was the intersection of his passion, his creativity, his ingenuity, his essence as a waterman, and his penchant for cannibalism.  As well as his supreme victory at sea over his sibling.

Why cannibalistic, you ask?  Each successive race in the Cup featured a secret edge exploited by the defender, which obliterated the challenger.  As the master cannibal, he knew them all and relished recounting the pivoting detail.

In 1887, for example, US Naval Architect Nathaniel Herreshoff examined the “Seawanhaka” rules in existence at the time and found several loopholes, leading him to create a boat with a deep S-shape fin keel.  The deeper keel created a significant advantage; as the sailboat tipped, the deeper keel added resistance to drift caused by the wind.

In like fashion, Dad’s business, Bernard Olcott & Associates and then later Olcott International, found a loophole – direct payment of patent renewals in bulk from his offshore office in New York (as opposed by the local patent agent).  In this way, he gobbled up what patent agents considered to be the cream of their business – the renewals.  Dad loved being the cannibal on the island!

However, when the patent renewal business matured in the mid-1980s and corporate patent owners began demanding new software products to manage the entire life cycle of patent management, well, the tide turned!  He couldn’t compete on the renewals alone.  He was forced to offer the requested software packages.  That required capital expenditures which he was simply unable to tolerate.  He never did adjust to the new paradigm – get new renewal business on the strength of sales of new software packages.  Competitors like Computer Packages, Inc. made huge gains in market share on the back of this model.

Dad didn’t like to be the hunted on Cannibal Island.

The implicit Darwinism of the model room did nevertheless inspire him in an area he could understand and control.  He dug up his engineer’s talents as displayed in his “Motor Design” treatise to begin writing new patents after an absence of some 40 years.

The keel was at the heart of his new work.

Over time, he realized that the shape and depth of the centerboard or keel was the determining factor in the efficiency or speed of the water craft.  Think of it this way – a sailboat is steering itself roughly 90º perpendicular (more or less) relative to the wind.  The less deep (more shallow) the keel, the greater the propensity of the sailboat to drift or move in the direction of the wind and more lateral with respect to its intended destination.  This drift reduces speed efficiency; the boat takes a less direct course to its targeted trajectory.

However, the deeper the keel, the more the sailboat will hold in the water relative to its intended direction.  Less lateral movement will be incurred, the boat will yield less to the direction of the wind, and the efficiency of the boat’s movement is increased.  Which simply means faster speed.  And victory in the America’s Cup.

Ah, but the depth of the keel was clearly defined by the “Deed of Gift” to be at a set depth.  Not an inch deeper!  How to get around that?  A clever Australian sailor found a way.  And how to improve on that?  Dad’s ideas were devilishly clever.  And that bigger idea will be the topic of next week’s post!

¹ – Fortunately for Dennis Connor, that remained simply folklore.  After losing the Cup in 1983, he is quoted as saying, “It was awful. I just did not want to get out of bed in the morning. I am usually full of life and energy… I just wanted to hide”.