Last week, I discussed cataclysmic instances of a falling sky.  Once every six billion years or so, you don’t want to be here (on Earth).

In the interest of full disclosure, there are other instances of falling sky which are not quite so universal, but just as terminal on a local basis.  Consider a neighborhood volcano that explodes.  Forget about ancient times like Mt. Vesuvius wiping out Pompeii in 79.  That’s year 79, not 1979.  How about the city of Plymouth, Montserrat in the West Indies (I used to renew trademark registrations here!)?  Founded in the 18th century, it served as the capital of this British Overseas Territory in the Caribbean for over 200 years.  Until it was wiped out by the Soufriere Hills volcano in 1997.  Today Plymouth is a ghost town, population zero.

My favorite “sky is falling” incident is the one that occurred in Peekskill, New York on October 9, 1992.  Earlier that week, a resident of that fair city, 18 year old Michelle Knapp scraped together $300 to buy her first car, a 12 year old used red Chevrolet Malibu.  She must have been excited to drive her prize back home and park it proudly in her driveway.

The evening of the 9th found her inside the house minding her own business during cocktail hour when she heard a sound outside that sounded like a “three-car crash.”  Stepping out to investigate, she was amazed to find a hole had been smashed through the trunk of her new used car.  Looking underneath, lying on the ground, Michelle saw a sizzling, hot, sulfurous-smelling 26 pound meteorite. 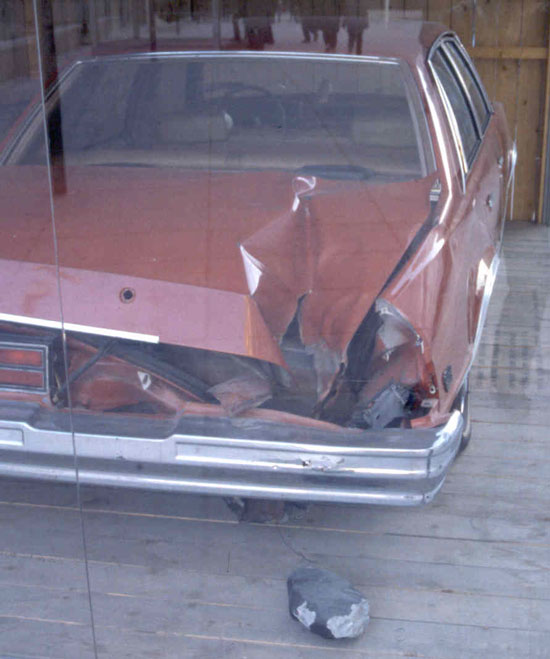 Seems like bad luck, right?  Buy a car and it gets hit by a space rock that a week earlier was somewhere between Earth and Mars?  In Michelle’s case, she was able to sell her christened Malibu for $10,000.

Please be careful when parking your car outside.

Aside from being the kind of transaction my Dad would have loved – a 3,000% Return on Investment (in less than a week, money for nothing!) – it is an example, nevertheless, that the sky can fall locally with wild and peculiar economic effects.  Usually negative.

Just this past week, for example, I flew to Milwaukee on business.  About four hours after I landed, a bright bolide (meteorite) lit up the night sky over Wisconsin and Illinois, with remnants crashing into Lake Michigan.  Maybe 15 miles from my flight path!  Hey, I didn’t think my blog was THAT bad!

Sometimes, of course, the sky can fall for sad reasons completely independent of Mother Nature!

This also applies to financial markets where the equivalent of a “falling sky” is known as a stock market crash.

Like meteorites plunging from the sky into the trunks of unsuspecting motor vehicles, these upending surprises can happen at any time.  But we know from our life experiences that these are very rare events.

For example, how many stock market crashes happened in the last two centuries?  A “market crash” is a matter open to some interpretation but is generally defined as an index price dropping as much as 50% from a previous high.

In the 19th century, there were 12 such crashes, one every nine years or so.  Most of these, back in the day, were called “panics,” such as the “Panic of 1893,”which was followed three years later by the “Panic of 1896.”  In this particular case, it seems to me that it was really just one long continuous panic.

In the 20th century, there were 16 crashes, many of them localized to places like Asia, Brazil, or Russia.  If isolated to the US, there were eight.  Interestingly, there was an extremely long stretch of market calm following the very famous crash of October 24, 1929.  Prices from the “big one” did not recover until the mid-1950s.  By the mid-1980s, it had been fully 55 years since a major market break had hit the New York Stock Exchange.

There was, naturally, much talk that “it couldn’t happen again,” due to various safeguards, the liquidity underlying the world financial markets, plain old “modernity,” and, of course, Phil Donohue.  At Columbia Business School, we studied the Crash of 1929 with great care.  But it was already distant enough historically that most if not all eye witnesses had sadly already been lost to time.

Except, of course, my Dad.  Not that he was an expert or was working on Wall Street at the time; he was only 11 in 1929.  But just as I vividly remember my days as an 11 year old on his first trip to Europe (and England’s appalling cuisine), you can bet your bippy that Dad certainly did as well.  And the aftereffects – the economy did not improve for some 13 years afterwards!  Put another way, all Dad knew from the age of 11 until 24 was a moribund economy with an unemployment rate over 20% and asset values down 90%!

It’s just about the only thing that World War II is credited with a positive global impact – the end of the Great Depression.  That is worthy of a cautionary tale in and of itself.  Are we truly doomed to war as a way to jettison hopeless economic performance?  What about the human costs like Nanking, London, Dresden, or Hiroshima?

At a simplified level, financial panics are caused by ever-increasing borrowing which invariably leads to a margin call.  In other words, as stock markets, property values, tulip bulbs, or what have you, climb in value, it is highly profitable to borrow (i.e. leverage) as much as possible to lock in prices before asset values increase again.  In bull markets, this is a winner.  Rinse and repeat.

Raging bull markets entice the entry of masses, who engage in the same search for credit to bid up unendingly the value of the object in question.  Prices soar!  As I quoted my Columbia Business School professor last week, Jimmy Rogers used to love to say “trees growing to sky!” (hands raised above his head as he drawled in his Alabama accent).

Eventually, somebody has a college tuition bill to pay, or a casino loss to cover, or a train wreck to reimburse, and that somebody will need to sell one of those assets.  The exact threshold as to how much selling is enough to stop the music remains undetermined; whatever it is, once surpassed, there is a mad rush for everyone to unwind their positions, sell their holdings, and cover their margins (unload their debt).  Prices plummet.  Wealth disappears.

I’m a fan of the free market economy.  But every once in a while, like in the crash of 2008, huge amounts of wealth (in this case, $1.9 trillion dollars) can be made to vanish.  Frankly speaking, that’s just too much scratch to lose.  Economies deflate.

Each tick up in the unemployment rate correlates empirically with a rise in the suicide rate.  In the words of our President, “sad!”

So back to my Dad in 1986 and 1987.  He said that credit card debt was too high and was going to cause a crash.  I promised last week that I was going to analyze this but I got distracted by the falling sky!