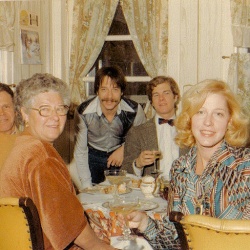 Above from left, Dad, Addie, Uncle Ritchie, Me, and Gloria in the late 1970s.

1979 and 1980 were seminal years.  I was a senior in college and it was time to contemplate a career.  Of course, I had no idea what it was I wanted to do.  My roommate Dan, on the other hand, was feverishly interviewing at Goldman Sachs and other Wall Street firms.  He ultimately scored a great job and is now in charge of some place like Europe.  But for me, all I knew is that I wanted “something international” but was undecided between the public service arena (like the Foreign Service or the United Nations) or international business (I would land my dream internship at United Nations within 2 years to try it out).  My Dad had made many off-handed remarks to people over the years that I was to join him at Olcott International and “take it over.”  I think I was 6 the first time he said that to someone in my presence.  So I had grown up with this as a possible notion.  But now at 21 years of age, I was suddenly ambivalent.  There was something peculiar about Dad.

Over the last few years, things had changed between my Dad and his 4th wife Gloria.  When I first met Gloria in 1971, I was 13.  I was hardly mature but I could tell that they seemed to be happy together and the Olcott household was a cheerful one.  Gloria was funny, with it, traveled with Dad to Brazil and Japan, and even wrote me a poem for my 14th birthday, dedicated to me as the “stalwart lad.”  On top of that, they left me a stash of Playboys in my bedroom, though Gloria removed certain issues she felt were too racy.  It certainly seemed that just maybe Dad had turned a corner from 3 failed marriages and that the future was going to be more stable.  Hope had sprung eternal.  After all, Hope was Gloria’s middle name.