After leaving New York at 9 in the morning on Pan Am, Dad and I were walking down Oxford Street, London by 10 PM, iconic black taxicabs and double decker buses whizzing by. I was hungry and saw all the burger places, just like back home. London looked like my kind of place since my diet was comprised primarily of hamburger. Dad warned me that those English burger chains like Wimpy’s were not as good as the ones back home. He was right!

And so I made my first discovery about England – the cuisine was inedible! Remember that this was 1969, before the food revolution had come to Britain and reversed the tradition of a very poor local cooking tradition – principally by boiling – made worse by the war. While in England, I suffered continuous bouts of nausea.  Once on the London tube with my Dad, I remember sitting across from a mother and her son, maybe the same age as me. He was nauseous and vomiting so I instantly was sympathetic. The only problem was that he was getting sick into a clear plastic bag.

The solution to this was to eat at Indian restaurants, as ubiquitous to London as Chinese is to New York. Once we found one we liked off of Piccadilly Circus, we went there every night.

We stayed in Knightsbridge for both of our weeks in London, including The Royal Thames Yacht Club for the second week. Dad was great – he was there to negotiate his deal but he gave the majority of his time to me and took me to all the spots I wanted to see like Big Ben, Buckingham Palace, and the Observation Deck in the BT Tower (which was the tallest building in the city at the time).

After touring Big Ben, which was first on my list of sites, we walked downstairs to see the adjacent Houses of Parliament and Westminster Cathedral. Dad bought our tickets for entry and soon after we started wondering around, we saw a tour being led by a right proper gent with a mighty particular handlebar moustache. His entourage consisted of a group of old ladies straight out of Monty Python. They looked exactly like these “Batley Townswomens’ Guild,” (before the reenactment of the Attack on Pearl Harbor).

The gentleman in question turned out to be Sir Gerald Nabarro, an MP from South Worcestershire, northwest of London. In a moment of extreme audacity, I crashed his little hen party and asked the odd looking man about the rock under the Queen’s throne (otherwise known as the Stone of Scone). “You mean the Stone?” he asked in return. “Yes, exactly,” I replied. This led to a discussion of the aforementioned coronation centerpiece that has been the object of contention between England and Scotland since 1296 (and has since been returned to Scotland).

Before you knew it I had replaced the Stone of Scone as the centerpiece of the tour.  On our return to New York, my Dad received the following picture from Sir Gerald’s office.  In my left hand is a transcript from the House of Commons on a day where my friend the MP had a lot to say.

I’m in the middle, next to Sir Gerald.

One of Dad’s clients was the Massey-Fergusen tractor company, with their headquarters and main manufacturing facility located in Coventry, up in Warwickshire. This became an out-of-London excursion, together with a visit to the factory. We took British Rail from Euston Station and arrived later that morning in this English city known for its motor industry like Jaguar, Triumph, and LTI (the manufacturer of London’s iconic black cabs). So much so, the city was in fact a target in World War II and was almost bombed to rubble by the Luftwaffe during the “Coventry Blitz” on November 14, 1940. The walls of Massey-Fergusen’s offices were covered by photographs of the carnage. The tour was unforgettable; I was amazed to see huge vats of machine oil in which engine assemblies were dipped. According to the thermometer on each vat, each one was in excess of 350 degrees Fahrenheit. The tour was followed as usual by a sumptuous lunch, very edible.

Nowadays, as an IT consultant, the factory tour is always one of my favorite activities. I have toured aircraft engine repair, plastic bottle and cap, food distribution, building supply manufacturing facilities, among others. One client manufactured aviation flight simulators where I was invited to land a commercial airliner at LaGuardia! Who’s driving your plane? Could be me!

English currency in 1969 was a non-metric mess – 20 shillings to a pound and sixpence was half a shilling. The symbol for a penny was not “¢” or “p”, it was “d,” I kid you not. It was really nutty and the English knew it as they ditched the whole thing in 1971 in favor of a decimal system, probably due to my complaints about it during my visit in July 1969.

As per our travel plan, we took BOAC Airlines to St. Helier, Jersey in the Channel Islands. It was in the hotel “telly” room that I watched Neil Armstrong step on the moon. It was probably the greatest day for any American abroad to be watching this historic event. The images of Armstrong on the moon were impossibly grainy and ghostly, but here he was bouncing around on the moon with Buzz Aldrin. Two older gents in the “telly” room congratulated me as if I had anything to do with it.

Dad and I took a jet foil to some surrounding islands like Guernsey and Sark, the latter being notable for being ruled by the “Dame of Sark” who forbade motor vehicles. Dad and I biked all over her windswept island. 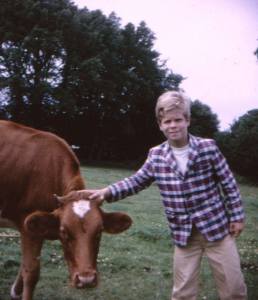 We returned to London, and had a few more meetings with the partners at Marks & Clerk (I asked one about the weather in Moscow this time of year and he assured me it could be quite hot and sticky over there). Finally, after almost 2 weeks in England and the Channel Islands (which curiously are NOT part of the UK but are considered to be a “dependency”), it was time to leave.

I thought England was a pretty cool place, my issues with the cuisine notwithstanding. It was oddly, in the summer of 1969, always sunny and a lot of cool music came from there like The Beatles, Stones, Who, Zeppelin, Clapton, etc. I even thought at the time that “the blues” was an English musical idiom. (Later on, I learned that the blues really came from my own country, not so far away from where I was bored silly in elementary school).

So we flew to Paris. This was very much anticipated by me for at least four reasons. It would be my first time in an exotic non-English speaking country. Would I understand anything? (The answer was no.) Secondly, because of my Grandmother. The woman who Bill Cunningham called “bubbles” or “popping champagne,” was dependably ever more animated when speaking about her own experiences living there as a newlywed in the 1920s. Thirdly, the monuments and tourist sites (it is of course very rich). And fourthly, (and again with reference to my Grandmother), I was hungry and looking forward to the cuisine!