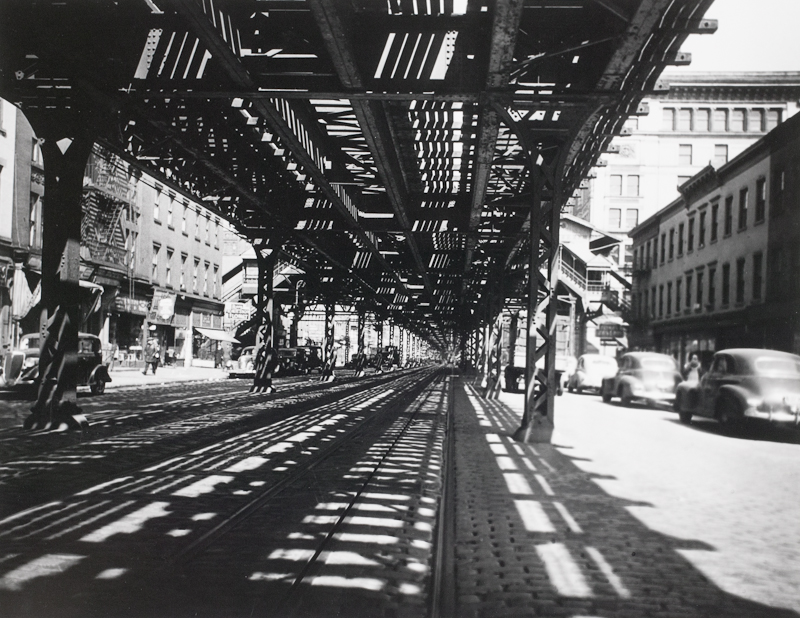 THE END OF THE LINE

Today, it’s just about impossible to find any trace whatsoever of the Third Avenue El.  The whole structure has been removed in its entirety.  The former support columns, formerly grounded in the roadway itself, have been paved over many times over.  The neighborhood surrounding Third Avenue and 55th Street, where PJ Clarke’s still exists today, is not recognizable from the 1940s-era photographs.

Union leader (and former Communist Party member) Michael J. Quill led a losing struggle to save the El, first in public hearings, then finally by picketing.  “In the last war there was an extensive mass transportation system to handle those who needed to use such facility because of the necessary curtailment of private transportation because of fuel shortages.  Will we have such facilities next time?” he argued in vain.  Postponed a few times, the last train ran on May 12, 1955, and the dismantling of the overhead trestles began in earnest. 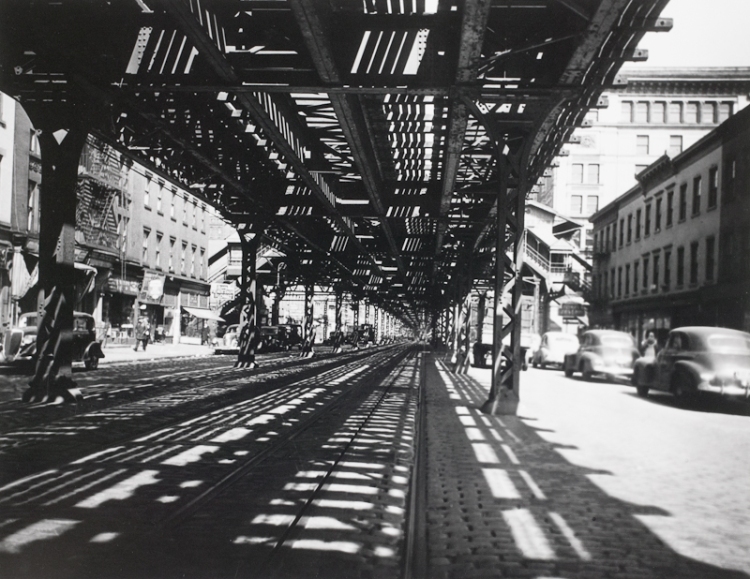 If you didn’t previously know about the El, is it possible that you could deduce its existence in the past by walking up and down Third Avenue today?  Not likely.  Nothing remains.  It’s like it was never there.  Almost.

One slight trace is detectable, however, and this has to do with things to see from the El as mentioned in my post “THE LOST LINE, PART 1.”  As I have previously noted, the view from the El is remarkable, and obviously somewhat night and day from the ride underground.  For example, pigeons never take off in flight underground.

As I rode the Jamaica El, I discovered that certain things are meant to be noticed from the overhead rails.  To this day, fading advertisements of products long gone can be seen in crumbling paint from the brick sides of 3 and four story buildings.  “Amorosa’s Scalp Rub” proclaimed one such as my train passed by on the way to Jamaica.  “For your hair,” as the sign says… 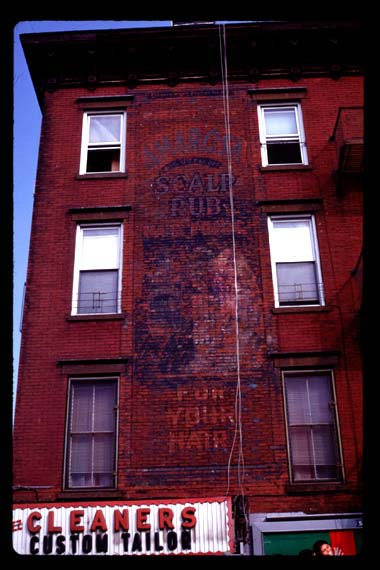 Also visible from the El, curiously, are the names of buildings as imprinted on the fanciful cornices of buildings.  These were obviously intended to be seen from the rails and stations as they are at El level.  Names like “Kresge Building” and “Forest Parkway” were clearly visible from the Jamaica El.  I am sure Dad noticed the very same names that I saw from the train.

Can such names be seen from the Third Avenue El?  The answer is yes!!

In my Manhattan neighborhood of Yorkville, a German and Hungarian immigrant enclave, I noticed the following fading marker on top of a tired brownstone, doubtlessly present during the El’s heydays.  Sometime two centuries ago, a proud immigrant built his own piece of the (Manhattan) rock and imprinted his edifice with the moniker “H. Muhlker’s Building, 1883.”  This would have been clearly visible from the platform of the former station at 84th Street and Third: 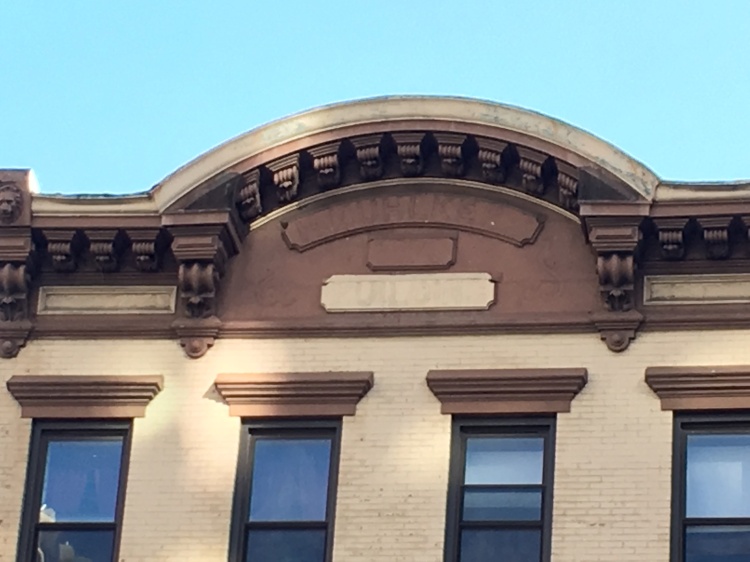 Just as the proud owners of the Pan Am Building similarly marked their tower 80 years later!

As for the El itself, Dad was typically split decision on whether the Third Avenue El should have been left standing.  While he praised the El for the ability to cool off on hot afternoons in August, he readily admitted at other times that the structure itself was “ratty” and an eyesore.  My Mom, for her part, loved to go antiquing under the shade of the structure, occasionally finding treasures.

Despite the hoopla over the impending opening of the 3 new stations of the Second Avenue Subway – delayed 60 years – and the new Hudson Yards 34th Street Station opened 4 months ago – the first new station to open in 27 years – it takes little to no calculus to determine that the New York City mass transit system today is actually significantly smaller than it was 70 years ago.  This is because of the removal of four elevated lines from the 1930s through 1950s: Second, Third, Sixth, and Ninth Avenues!  After demolition of the last El on Third Avenue in 1955-1956, the system had lost 123 stations in Manhattan alone!

Only a miniscule section of El remains anywhere in Manhattan today — only on the 1 train on the Upper West Side, past Morningside Heights on 125th Street.

I wonder if Dad noticed the demolition of his former El station on the Jamaica line, Sutphin Avenue, when it was closed in 1977 and demolished soon afterwards.  He never remarked on its passing, just as he never commented on his Lithuanian heritage.  His father had died 5 years previous and he no longer had any connection to the neighborhood.  He had exchanged his old environs of Jamaica for his new one in Weehawken.

If the Third Avenue El had survived into my time, I would have definitely ridden the 8 train as an alternative to the overcrowded and beleaguered Lexington Avenue line.  Instead, the 8 train was 86’ed at the ripe old age of 77.  May we all go beyond! 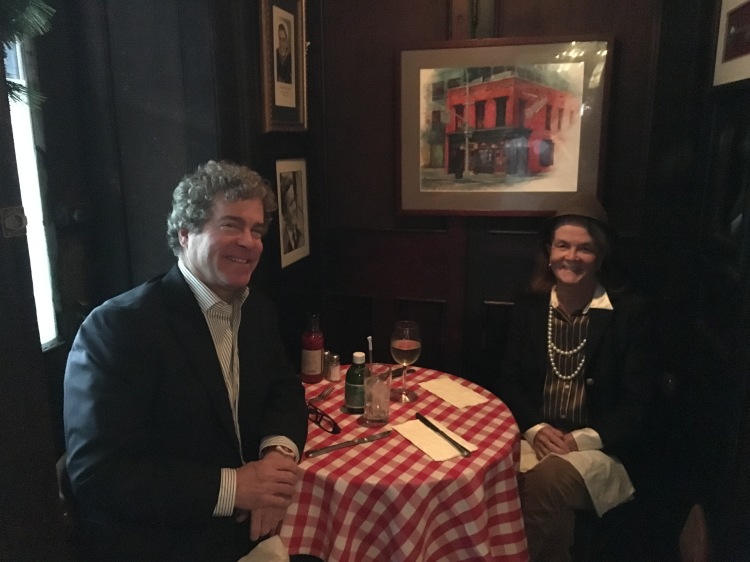 The Author and Mrs. Bernard Olcott No. 2, dining at PJ Clarke’s recently.