LOOKING BACK AT THE FILM NOIR 1940s

“The Lost Weekend,” as previously noted in my post of the same name, was the Academy Award best picture of 1945.  It not only reveals Gotham of yesterday by way of moving images, like the main actor stumbling haggardly under the Third Avenue El in search of a drink, but also by way of the language and the accents of the era.  Unlike the 1960 classic “Butterfield 8,” the personalities in “The Lost Weekend” engage with each other directly, with a minimum of game playing or social charades.  It was the 1940s way.

Significantly, as it relates to The Bernard Olcott Story, it’s about a writer!  There’s even a reference to my distant cousin James Thurber (on my mother’s side) in the first few minutes.

What can you say about the film noir world of the 1940s, the formative decade for my Dad?  Well, for one thing, there were a HELL of a lot of barber shops.  Everywhere!

However, the first thing I noticed were the strong New York accents, most notably as spoken by the bartender Nat.  He routinely addresses the main character, Don Birnham, as “Mr. Boy-nam.”  This brings me back to working at Olcott International in Weehawken in the late 1970s and afterwards, please see my post “GOODBYE 212, HELLO 201?”

But when was the last time you heard a strong one?  It’s curious but there seems to be fewer and fewer speakers with the veritable Noo Yawk accent.  According to filmmaker Heather Quilan and linguist Dan Kaufman (as reported by Hansi Lo Wang of NPR.org), our regional intonation is dying out.

They point out that what we call the New York accent was really more of an ethnic artifact than identified with a specific locality, like Bensonhurst (“Ben-sen-hoist”).  Accents need people to stay put in order to develop.  Working class people in the 1940s (and before) tended not to move around.  That has changed.  Dramatically.

As for himself, my Dad spoke in what can be called the Manhattan Flat accent.  This was dramatically different than his Dad Michael who spoke with a Lithuanian accent.  Well, he was an immigrant and was born in Lithuania.  He’s permitted.  What does a Lithuanian accent sound like in English?  Listen for yourself.

To my native English ears, her lilting accent strikes me as more akin to Finnish than to Russian, which is much, much heavier.

On the other hand, my maternal Grandmother spoke English with a distinct French accent, with not a trace of her native Quebecois.  She had her reasons, like she hated Canadians.  Go figure, eh?

The second thing I noticed when I watched “The Lost Weekend,” were the odd expressions used by Gloria (the barfly in the film, not my stepmother).  Early on, she dismisses a silly comment by Don Birnham with the push-back, “Don’t be ridic!” meaning “ridiculous” for “ridic.”  My ears perked up because I have only heard one other person ever use that expression – my Dad!  Dad was choosy, he never used her other terms like “don’t mensh” for “don’t mention it” or “natch” for “naturally” (this is a common usage today).

Gloria the barfly is a character!  She slings around the bar shooting her index finger as a pistol.  Rosie the Riveter, she’s not!

Thirdly, when Don Birnham saddles up to the bar, what does he order?  My Dad’s favorite drink, Rye Whiskey!

Aside from fading accents and 1940’s expressions, the scenes from “The Lost Weekend” reveal a world diverging a bit from the black and white cinematic world of Film Noir of the époque.  Film Noir takes its name and is distinguished by its heavy handed shadows separating the world into simple opposites.

The Film Noir protagonist is typically a detective (called “the private dick”) who has a murky back story that slowly unravels during the course of the film.  It usually involves an old colleague that wants to “do him in.”

I can relate to film noir.  My life would make an excellent film noir!

So there are heroes and villains plain and simple.  An excellent example of the genre is the film “The Dark Corner” featuring Lucille Ball (before her Desi Arnez days) playing the dick’s cagey secretary.  The office is right next to, you guessed it, the Third Avenue El, which rolls by continuously. 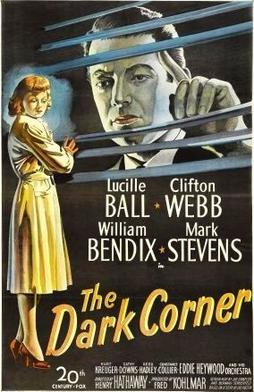 Everything was simpler in the 1940s.  The worldwide power grab by an evil clique in Berlin had been put down, at a great cost.  The world was black and white.  You were either in or out.  The personalities of the era reflected this.

The Korean War managed to fall under this world view.  Open aggression by the North!  But it fell apart during the Vietnam War where the Communist – Free World dichotomy couldn’t hold.  “Godless Communism” led America to do some ungodly things, in Technicolor no less.¹

Back in the 1940s, if you had a problem, the solution was easy and uncomplicated.

PTSD?  Just have a drink and relax!

Nowadays, it seems that even the old adage that “boys are boys and girls are girls” – there was nothing more certain, wouldn’t you say? – can be thrown out the window.  Nothing is quite so sure anymore.  Are we are on our way to having four restrooms instead of two?  There are even warnings on Fox News about bearded pervs in dresses following little girls into women’s bathrooms.  Sometimes, it seems to me that the world is at risk of collapse from silliness.

Don Birnham showed some real complexity as a foil to the Film Noir of the era.  He was portrayed as an addict and couldn’t help himself.  Alcoholism was introduced to the masses as a real sickness.  This was new to movie audiences composed of the Greatest Generation.

However, at the end of “The Lost Weekend,” Don Birnham yields to the convention of his times and finds an unrealistically simple solution to his drinking problem. He just drops a cigarette in his glass and that’s that.

Earlier in the film, Don Birnham says, while drinking his rye at Nat’s Bar, “I’m one of the great ones!  Michelangelo molding the beard of Moses.”  This is something my Dad would say!  Years later, he drew numerous comparisons between himself and Michelangelo.

Dad adopted his own funny logic along the way.  After his divorce from wife no. 5, he introduced me to his newest date in the late 1990s, a lady named Babette from New Jersey (in his later years, Dad only dated Jersey Girls).  Just before I never saw her again, he gave her a pendant with the engraving “2 + 2 equals 5.”  Maybe Babette couldn’t add?

Anyway, Dad considered himself an artistic genius, which would probably surprise most readers here who knew him personally.  To Dad, logic turned on its head was a form of art – provided it suited his purposes.