This story elaborates on my post, “SCRATCH ON THE POOL TABLE OF LIFE,” and goes on from there.

People who marched to Dad’s doorstep with investment ideas, at first, were either extraordinarily interesting or entertaining.

Take Huntington Hartford, for instance. Though unknown to me, he was the storied scion of A&P. When I met him, I wasn’t aware of this, I thought he was just another eccentric inventor. Apparently, the world is full of them.  Huntington’s investment idea was a tennis-type game he had invented called “tennet.” As recounted in my post, “IN DEMAND, AND THEN NOT,” Dad and I drove to his apartment at the River House on Manhattan’s East Side. I played a game with Hartford (set in a squash court); he apparently made a pitch to my Dad to invest in his game. Dad said no. I forgot about this meeting until many years later, when I started writing this blog.

Ever heard of tennet?

I didn’t think so. Good thing my Dad passed on it.

Then there was Bobby Edwards, the fabled Jewish cowboy. Bobby’s deal was to go drilling for oil in Kansas. He was a wildcatter, trying to resuscitate tired old wells in southeastern Kansas. He had the wind at his back as oil prices were rising in the mid-1980s. But these were really marginal, post-menopausal wells.

They needed a lot of work and equipment, like water injection. Bobby seemed to be surprised how the hoses would freeze up 6 months out of the year.  Worse, he was completely baffled after they would snap when a truck drove over them in the snow.

Accordingly, investing in Kansas oil wasn’t great in terms of return on investment. Dad, to his credit, bought into Bobby’s deal on a conservative basis. What made it work were the generous tax write-offs, like “intangible depreciation.”

But, as I described in my post “MR. SWAGGER’S PUMP AND DUMP,” Bobby’s real long suit was entertainment.

If Hartford and Edwards had been Dad’s only outside investments (meaning outside of his main wheelhouse, the niche business of patent annuities), his final net position in such would have been a touch above water.

However, and unfortunately, Dad was unable to resist the clarion call of two others.

In the early to mid 1980s, the name of Herbert Wellington often sounded within my earshot from both Dad and Mike the Accountant. Despite the lofty fake name I’ve given him here, Herby was not of high birth. Despite his rough edges, he had worked himself up to a comfortable living in a leafy suburb of Nassau County, Long Island.

“Who’s Herby?” I asked my Dad one afternoon at lunch. “He’s the world’s best stockbroker,” Dad replied in his affirmative voice. “Herby has made me a lot of money.”

Neither then nor now, have I ever learned exactly how much that was.

But nevermind that. You really don’t get to run audits on your parents.

High returns were of interest, naturally. I was intrigued and asked my Dad if I could invest with Herby as well. Maybe I could learn something.  And make a dime at the same time.  He promised me he would talk it over with Herby.

It took several promptings afterwards but eventually account opening papers were forwarded to me for signature. I coughed up several hundred dollars to open my first brokerage account.

At first, Herby didn’t buy anything for me. It was kind of strange as I was expecting some kind of financial wizardry. Dad kept praising him incessantly. I wanted in on the game!  A couple of weeks went by and I was left to wonder what position this financial mastermind would stake out on my behalf.

After pestering Herby on the telephone, seemingly for ages, he proudly announced one day that he had bought a stock for me. Turned out to be Wicks, a real estate company that was a hot stock at the time. “Home building is a booming business, James” Herby told me in his raspy voice.

True, Wicks was one of the high flyers of the day. We were in the middle of the Reagan administration. Spending was way up. Taxes were down (before they came halfway back up). If people were to pour excess cash into the nation’s housing stock, Wicks seemed to be a way to front-load the growth cycle.

Except for one thing. The stock went down immediately after I started owning it. And it stayed down.

A portrait of my very first investment.

According to Dad, Herby could do no wrong.  Oddly, he never showed any interest in what was happening in my portfolio (really, a kennel). I guessed at the time that I had just been unlucky.

Within a year or two, I was off to Business School myself to study finance. I still had Wicks as the solitary occupant of my portfolio, refusing to budge like a bad tenant that has stopped paying rent.  As I researched careers in finance, I paid Herby a visit one day at the world headquarters of Slaminger downtown.  I was disappointed to find a cliché sales script on his desk; he was evidently cold-calling people that day and trying to persuade them to buy IBM.  Impressive.

As recounted in my post, “SCRATCH ON THE POOL TABLE OF LIFE,” Black Monday hit while I was in business school that day up in Morningside Heights. With the other students, I watched the monitors in panic as stock prices dropped heavily. As a student of history, I knew there was one way to profit off a market break. 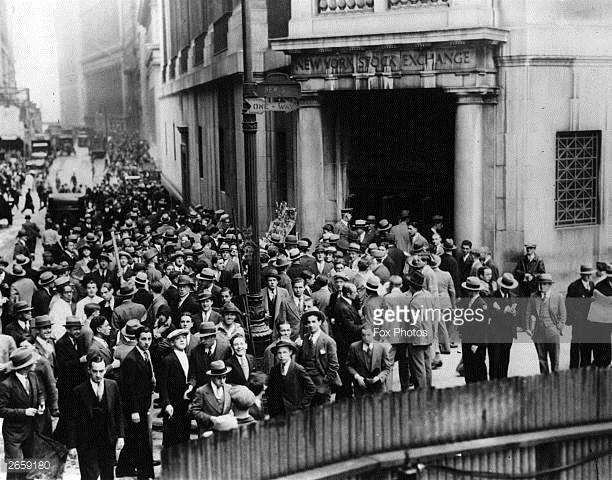 On the pay phone in the lobby, I called up Herby’s office. Morgan, his trading assistant picked up, as always. After a little chit chat about current events that morning, using the word “wow” liberally, I told Morgan I wanted to make a trade. “Ok, James, what would you like to buy?” she asked me with more than a little curiosity. I told her, “Morgan, I’m selling. I want to short 100 shares of Slaminger.”

The irony started to drip from the phone onto the floor below me as I stood in the booth. “What?” Morgan said, “you want to short us?”

I replied, “Yes. Can you execute on this?” Her tone changed. She got the message and I could feel her brighten up on the other side of the receiver. After all, a stock trade is a commission.  “Sure thing!” She said.

Later that day, I called back to confirm the order. Morgan told me my short position was confirmed. The sweetest part of this story is that Slaminger’s price had dropped over the course of the day. Of course it had dropped, it was one of the biggest sell-offs in history!

“Buy 100 shares to cover,” I pounded the glass on the phone door lightly to emphasize that my small profit had just been sealed. Morgan complimented me afterwards, telling me I had balls to short Slaminger through the very same firm.

So I finally did make a dime through Herby.

My Dad? Not so much. I learned a year later that he had sued Herby for churning and won a million dollar settlement.

I thought I had heard the last from Herby. I was wrong.

Next week: PANOPLY OF SWAGGER, PART 3