CRASHES NEXT TO ROOM 31, REVISITED

The 2nd part of the Room 31 saga.  I stop and visit the Bates Motel.  Personally.  A repeat from last year.

23 years after the events of my last story, “CRASHES NEXT TO ROOM 31,” would you know that your humble narrator is still plying the highways of the Garden State? In fact, I drive through the Lincoln Tunnel regularly on my way to work.

As I pondered this story, I was furtively glancing over my shoulder while exiting or entering the I-495 trench leading to the gaping hole of the Lincoln Tunnel. It’s a very busy place, a “great attractor” of traffic where cars merge and change lanes on a moment’s notice. I could only steal a glimpse or two safely of the former York Motel, more easily on the New York-bound side. It’s still there, looking much more polished in 2017 than it did in 1994 (or 1982). Gone is the sign advertising “hourly rates.” Up is the new logo of a national motel chain and what appears to be coat of fresh looking white paint.

I had never been a guest of the York Motel on a nightly – or otherwise – basis and thought that stopping by for a quick look around might be interesting. I wondered if I would be able to find the infamous room 31 and what the motel might look and feel like close up.

Online, the motel advertises cheap rates and transportation to and from Manhattan. I knew all about that from my Dad’s move to Weehawken in 1970. Close to Manhattan, sure. Times Square is almost exactly 3 miles away as the crow flies. Just try driving there at any civilized hour of the day (or early evening). If you could walk on water, you would get there faster.

Does the locality resemble Manhattan in any way? Can you walk anywhere to get a bagel?

Not likely. I have long since been fatigued by marketing and promotion that tries to sell New Jersey as part of New York.  I have my reasons.

Anyway you strangle it, the rates are way less than Manhattan!

Last Thursday, after I published my post, I was driving back to New York City. The York Motel was, of course, fresh on my mind. I knew that I would be passing it on the right. If I wanted to see it for myself, it would be an easy off-ramp – the same one my Dad took in 1994 where he was rear-ended.  Maybe even take a few pictures. It was a pitch black October evening, so visibility would be limited. But what the hell?  This is an October kind of story.

The events of December 23, 1982 at the York Motel, like the one on October 1, 2017 at the Mandalay Bay, was proof that the ogres of Grimm’s Fairy Tales hadn’t been so fanciful after all. In fact, I am persuaded that there have always been ghouls in our world.  The best advice, passive as it might be, is to steer clear.

At the Kennedy Boulevard exit, I pulled my trusty ride over to the right and started climbing the hill of the exit ramp. By 9PM, the dinner traffic rush to Manhattan was subsiding so concerns about getting rear-ended were much diminished. I did have to make a dramatic and immediate hard right to pull into the parking lot of the motel. Parking was provided on either side of the oblong structure. I chose the right hand side, thinking that I could drive around the building like most motels. I was wrong. The narrow driveway, bounded by a high white plastic fence on the right, dead-ended.

I parked my car and popped out to look at the room numbers under a gloomy night sky, illuminated by tinny overhead lights, the ambiance as inviting as an 1950s-style hospital operating room. The numbers were all 100s, presumably for the first floor. I looked upstairs and noticed all numbers were in the 200s, as expected. So where was number 31? I followed the numbers to room 120 at the end. So where were the 130s?

I walked through a hallway and found room 140. Turning left, I walked down the descending numbers and easily found 131. From the outside, it looked exactly like just another dingy room.

Care to rent this room?

The motel didn’t look as nice close up as it did on the highway. On this side of the joint, the east side, I could see that the Palisades Cliff had been dynamited to make a flat lot on which the motel had been built. The rough exposed rock formed a solid wall to the East, which must have made for dark shadowed mornings.

I followed the walkway towards signs marked “Office” and soon found myself in a modern motel check-in and check-out vestibule, an exotic clerk behind a thick sheet of what appeared to be bullet-proof glass. On my side was a man whom I thought was maybe another guest checking in or out, but he turned out to be a manager, or possibly owner.

So, I chatted him up. Yes, he knew that the Motel had been formerly known as the York Motel. He knew that something had happened in Room 31 some 35 years ago and clearly did not want to talk about it. Understandable. There would be no access to any secret information about the events of December 23, 1982; these folks knew less than I did.

Here’s a picture of the lobby adorned with Halloween regalia. 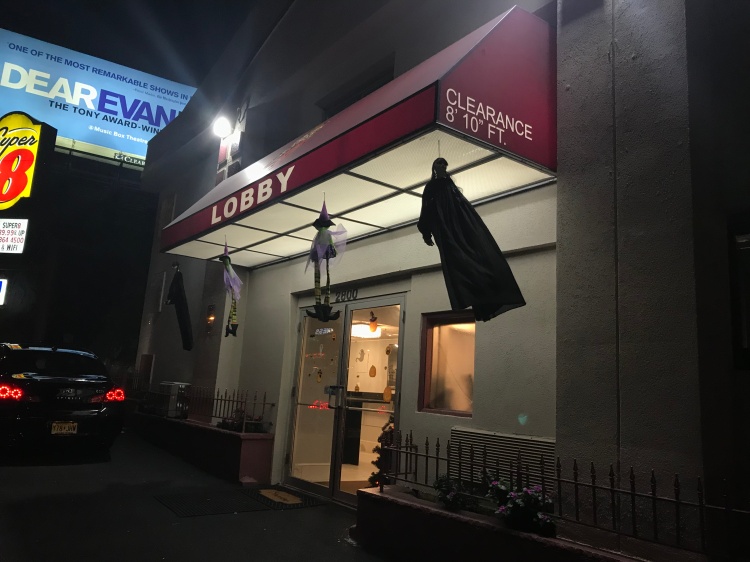 I made a U-turn and came out the way I had came in, looking carefully for traffic exiting I-495. When the coast was clear, I floored it so that no one could hit me and navigated my Dad’s ‘Intersection of Doom’ in the murky night. It did not feel very welcoming and, for once, I was glad to be in the Lincoln Tunnel moments later.

Sometimes the past does not want to give up its secrets.

To be clear, my Dad was not directly involved in any way with the York Motel.  It’s just that this place was in fact one of the cornerstones of his ‘Intersection of Doom.’  Most people simply know it as a traffic clogged junction where they were held against their will for hours at a time.

Across the highway was the pharmacy where Dad returned condoms because “they were made for midgets.”  The “left turn from hell” was cater corner.  His funeral home was on this same side (as the motel) of the highway, down a few blocks.

I haven’t yet discussed much Dad’s last days in the Bernard Olcott Story.  To jump to the future for a brief moment, on Saturday September 2, 2006, he attempted to drive for some reason from his home in Weehawken to his office.  It was an extraordinary day in the New York City area.  I remember it well.  The weather the entire day was stormy and rainy, exceptionally dark for that time of the year.  Dad became lost, which was strange in that he had lived in Weehawken for 36 years and the drive was little more than half a mile.  He knew the way like the back of his hand.

Inside the family, we never knew exactly what happened, but he somehow ended up at a service station in an agitated and incomprehensible state.  An ambulance was summoned and, unknown to us, he ended up in a hospital for observation, until I was called the following Monday, Labor Day.

We don’t know for sure, but my bet is he got tangled up in this intersection bordered by the York Motel.