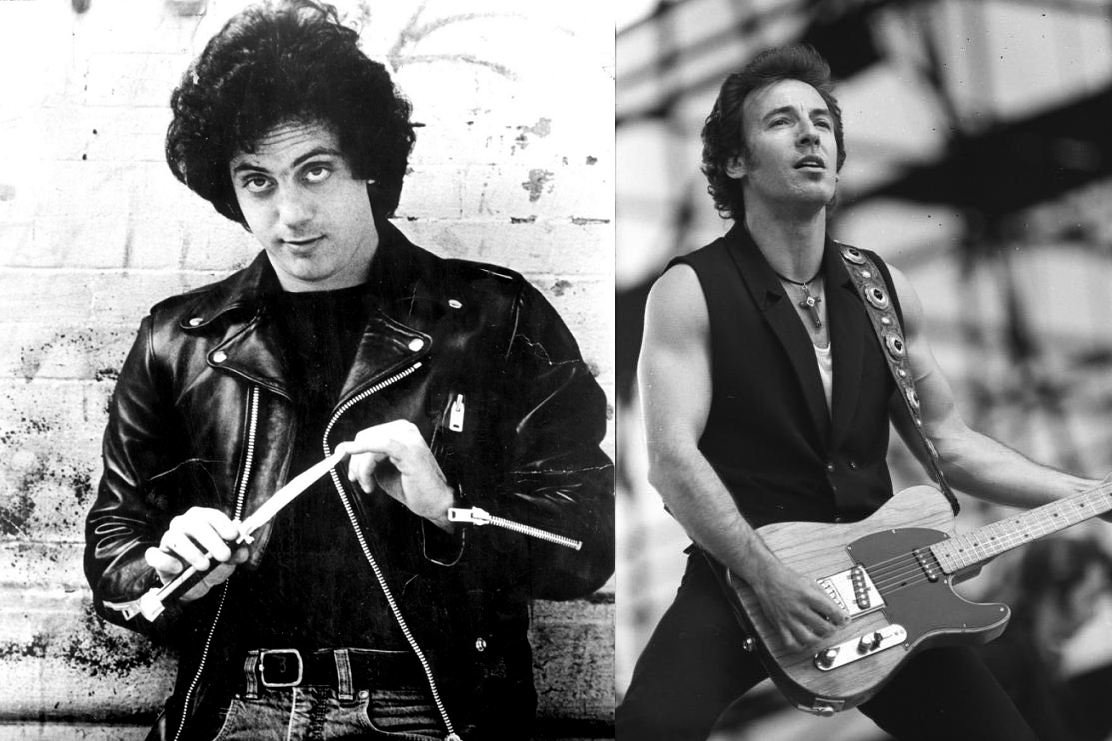 WHAT’S IN A BORDER?

Today, folks I run my first repeat.  Forget USA vs. Russia!  This post concerns the ongoing war between New York and New Jersey and is the all-time favorite among my readers (more than 1,000 views!).  Please share among your nutty friends who have a stake in this idiotic war!

North of the Rio Grande River is a huge expanse of North America divided up into 49 states, 10 provinces, 3 territories, and 1 district.  Just about everywhere, the dividing lines are sleepy affairs.  No fences to block your way.  With a flashlight, you might find a surveyor’s marker under a bush assuming you knew where to look.  Typically, a sign is erected on the “border” welcoming you to the new jurisdiction.  Some places have signs to serve the opposite purpose, that is to say farewell to the hapless traveler.  In the Southern United States, it is possible to see a sign with the information “You are now leaving Bucksnort, Hurry Back!”

Technically, the most severe crossing is the one between the United States and Canada.  When Mrs. Findlay F. Traveler from the US drives over that line, she can expect to be interrogated by overly inquisitive Canadian custom agents eager to ascertain just exactly how many bottles of liquor and cartons of cigarettes are stashed in the trunk.  Any kind of vague answer will trigger an immediate request to pop that puppy open.  A precise inventory will be taken and the requisite CDN $38.50 levy lifted from the traveler’s credit card.  This interrogation is also offered in French as a sucker ploy.  If Mrs. Traveler chooses (poorly) to respond to any question using her middle school French, the agent’s eyes will harden with suspicion and the customs’ duty tagged with a 12% nuisance surcharge.  It has nothing to do with us in the US; it’s related to some kind of internal trauma up there.  It’s best to answer everything in English taking care to ask if the border station has a gift shop where you can buy the moose tee shirt.  Knowing the system thusly, you can be waved through in under 60 seconds.

Driving back into the US on the other hand is a quick passport sniff to insure that you are really from one of the 63 entities mentioned above (or Hawaii and a few other scattered islands).

All of this is relevant to The Bernard Olcott Story because of one peculiar exception to this peaceful patchwork littering the landscape from the Atlantic to the Pacific.  One border where the crossing is associated with profundity from a logistical, emotional, and psychic (perhaps even psychotic) point of view.

So to employ Bernard Olcott’s (2 out of 4) Grandchildren to help convey the point, THIS is how borders look and feel most everywhere: 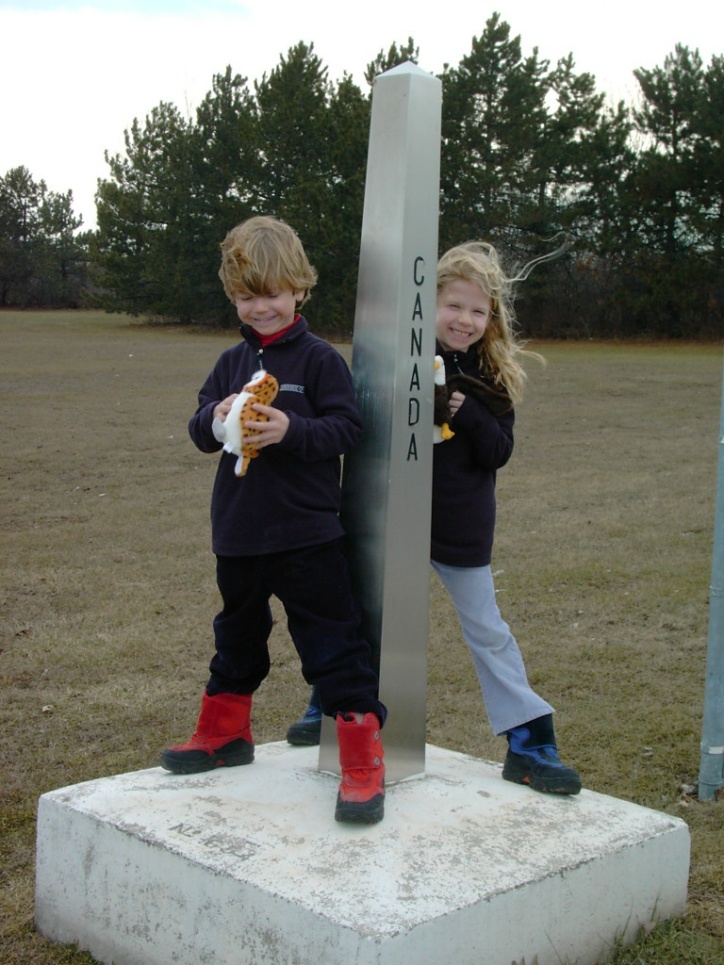 Ain’t that nice?  Kiddies running around the border playing with plushies!

At least everyone is smiling.  “Achtung!  Your papers, please!!”

And where would that be?  The one line more bitterly contested than all the others.  The border demarking civilization from the heathen lands (as seen by either side).  One that witnessed more than 50 years of armed raids and skirmishes, captives being taken, and crops burned.  The very same where one combative state wrested territory away from its neighbor by judicial fiat sanctioned by none other than the United States Supreme Court in 1998!

This is about the festering war between the Garden State of New Jersey and the Empire State of New York.  Sides are sharply drawn – you either prefer Billy Joel or Bruce Springsteen.  BJ or BS¹: That is the question, there can be no prevarication.

This is the one border north of the Rio Grande which all locals regard as a NOT THIS kind of a situation.

Where was my Dad in this simmering dispute circa 1970?  He saw it mostly from a tax angle.  He had taken great pains to avoid the 90% top tax bracket for the proposed joint venture with his UK colleagues.  Now that New York City in 1966 had imposed a new income tax – even if it was a paltry 2% – he was ready to pack up his bags and move out to the boondocks.  (It should be noted that this 2% was in addition to the state income tax which already ranged around 6-8%.  So the total New York State and City tax bite was on the order of 8-10% – the highest such rate in the United States.

Factor in also the high cost of rent.  He was paying top dollar for his NYC office and apartment.  Move out and save at least half, easily.

So which one?  If Dad was ditching Billy, then the choice was Bruce or whoever represents the Nutmeg State musically in this supposed three-way rivalry.  Who the hell might that be?  Michael Bolton doesn’t exactly wax rhapsodically about the Housatonic.  Keith Richards?  He lives in Weston, true, but he’s not from New England.

Sit right down Connecticut!  You need not even apply!  But for joke reasons.  Dad of course couldn’t care less about musical acts from the 1970s; he wouldn’t have moved there even if Nelson Eddy invited him to sing a duet every Sunday Brunch at Toad’s Place in New Haven.

The Constitution State has its charms, to be sure.  But not without its rough edges.  In the midst of all that bucolic green, you have to somehow account for Bridgeport and Hartford.  Maybe two of the ugliest places on the planet.  I’ve always joked that they find the bodies in Bridgeport and then burn them in Hartford.  I should know!  I went to high school between those two cities.

But from Dad’s point of view, the Connecticut option was already toast.  He was dismissive of what he called “wives’ preference” for Connecticut (over New Jersey) due to its private clubs and perceived snootiness.  Wives and ex-wives, for Dad, were in abundant supply.  Their opinions ever more so and therefore discounted exponentially.  It was also further away from what he would always regard as his real home base, New York City, even if he was not actually to be residing there for tax reasons.

That left next-door New Jersey as the top contender.  Like Connecticut, “Enjoy NJ” is a state of contrasts.  If you want to talk about snootiness, you could head over to Jackie Kennedy Onassis’ horse farm near Mendham or grab an advanced degree in physics from that finishing school (Einstein’s place) next to the Governor’s mansion “Drumthwacket.”  On the other hand, there are some image problems.  How about that colonic appearance for those exiting New York City via the Lincoln Tunnel and traveling south on the Turnpike?  The smell between Rahway and Elizabeth was particularly heinous (which has since been cleaned up).  Back when capital punishment was legal in the Garden State, they used to execute prisoners by holding up a mirror to the inmate’s face.²  I found it remarkable that whenever Dad pulled over to ask directions in any Jersey town, nobody had a clue!  Even when he asked for obvious things like the way to the Turnpike, Parkway, or maybe even the Goddamned local post office, the response was ALWAYS a nose-pickin’ “huh?!”.  Was it because people were too embarrassed to admit they lived there, I wondered?

As for New Yorkers, Dad had a joke about them too.  “How can you pick out the New Yorkers in the zoo?” he would ask me.  “They’re the ones who stay in the elephant room longest.”  Dad wasn’t half wrong about New York, of course.  Anyone who has lived in the city during the summer has experienced the wonderful aroma of what can only be called “פּיס וואַסער (Yiddish for pis vaser)” which gently simmers curbside over the course of a few days in the 90 degree heat.  It could dissolve nose hairs.

The piano man was over.  In the end, Dad chose Bruce.  Guess he was born to run.  The bitch kitty here is that New Jersey ended up enacting their own income taxes (just as Connecticut did).  But that was later.

¹ – This unique phrasing was contributed by avid reader Ned McDonell.

² – courtesy of Rodney Dangerfield, who once rented a summer house in Bayonne.

My Dad’s disagreements with Mayor Lindsay, the last straw:  THE END OF AN ERA.

My first trip to New Jersey as a destination: WELCOME TO NEW JERSEY!

My Dad’s last residence, the same street with a memorial to Alexander Hamilton: HIS NAME WAS ALEXANDER HAMILTON

The resonance of Hamilton’s duel on my life: DUEL AND DEATH