Hamilton was said to have been popular with the womenfolk. Illustration by Roberto Parada

One such who had no love for Hamilton was another New Yorker named Aaron Burr who hailed from the opposing Democratic-Republican Party.  The two crossed swords numerous times such as a prior duel Burr fought with John Baker Church in 1799, who was married to Hamilton’s sister-in-law.   The duel ended peacefully with Church apologizing, and soon thereafter Burr sought Hamilton’s support in funding a water company.  Unfortunately, Burr baited-and-switched Hamilton in that the new venture turned out to be not a water company at all, but the Bank of the Manhattan Company (fore-runner of today’s JP Morgan Chase Bank).  Hamilton, who already had elite bankers in his pocket, did not want a new bank carrying the flag of his opponents.   He withdrew, crying foul.

Things got worse in the national presidential election of 1800 where the Electoral College voted Aaron Burr, due to an incompetent miscalculation by the winning Democratic-Republicans, to a tie against his own running mate Thomas Jefferson (he was supposed to have one less – oops!).   The rules accordingly called for ties to be broken in the House of Representatives.   A faction of Federalists pushed to promote Burr over Jefferson in order to heap further embarrassment on the opposing party.  Burr tried to grab the brass ring himself and when he ultimately lost, due to complications WAY beyond The Bernard Olcott Story, Jefferson felt betrayed and never trusted Burr again.  Hamilton had played a key role to bring Federalists back in line to oppose Burr.

The final straw was when President Jefferson dropped Burr as his running mate in 1804.  The latter then campaigned for Governor of New York and lost, due to a smear campaign in which Hamilton had played an indirect role.  Burr demanded an apology from Hamilton for remarks attributed to him in letters written by and directed to third parties.  Hamilton deferred, suggesting that he couldn’t answer for someone else’s interpretation.  Burr challenged Hamilton to a duel.

On the morning of July 11, 1804, both men, with their supporters, rowed across the Hudson River from Manhattan to the woods below the cliffs on the Weehawken side.  As dueling with pistols was illegal in both states, they chose this site, the locale of numerous duels since 1700, as New Jersey was perceived to be more lax in enforcement.  Thus US Vice President Burr shot Hamilton in the ribs, a mortal wound.  Hamilton’s supporters rowed the dying founding father back to Manhattan where he passed the next day.  Needless to say, the duel did nothing to advance Burr’s own declining political fortunes (he was still in office as Vice President!).  Murder charges were brought against him which were later quashed by the New Jersey Supreme Court for reasons that are not exactly clear.

In hindsight, and this is painfully obvious, Hamilton’s decision to traverse the Hudson over the future lanes of the Lincoln Tunnel that July morning in 1804 was a poor one.  No doubt he did not like Burr, whose views he saw as potentially ruinous for the new republic.  If so, why is it that Hamilton is said to have fired first, and well above Burr’s shoulder?  The exact circumstances of the duel are not clear as the eyes of all supporters were turned away to plausibly deny witnessing an illegal event.  Maybe Hamilton knew that shooting Burr would not enhance his own reputation and felt that this was mutually understood.  A fatal miscalculation.  It’s difficult to build anything when you are being prosecuted for murder.  Or dead.

The exact dueling ground itself is located at the bottom of the cliffs, not the top where the monument is found today on Hamilton Avenue.  The stone on which the mortally wounded Hamilton rested was brought to the top of the cliff when railroad tracks were built through the original site in 1870.  The monument has been vandalized many times before and after its move to the top of the cliff, including Hamilton’s bust itself which was thrown off the cliff in 1934 and never recovered.*

Today, the original dueling grounds are a forlorn stretch of railroad track at the bottom of the cliffs on which the Hudson-Bergen tram runs.  The woods are long gone and the area sits in shadow every afternoon.  Hamilton’s own son – his eldest – had died at the very same spot 3 years earlier!

While Dad made frequent reference to the monument incorrectly as the site of the duel (the plaque was a little vague on that point), he never spoke substantively about either Hamilton, his motivations, the wisdom of coming to Weehawken in the first place, or the duel itself.

In any event, Dad soon came to focus on Hamilton Avenue, which was a quiet residential street in comparison to the hustle and bustle of Boulevard East.  He was nevertheless pleased by the historical marker; perhaps he felt that it lent an air of gravitas to the street in particular and to Weehawken in general.  Hamilton Avenue benefitted from good housing stock, the view, and a depressed real estate value.  During the winter of 1970-1971, he secured new rented space for both the office and himself in no. 19, the penultimate house before the Avenue turned inward towards King Avenue.

For some 35 years afterwards, that house, 19 Hamilton Avenue, came to be Dad’s last residence.  The office was relocated to the first floor, while he rented out the three bedroom third floor apartment for himself as a residence. This was, of course, way too much space for a bachelor and a son who came to visit for a few months every summer.  Clearly, he had to do something about the lack of female companionship and he set about to resolve this problem with his usual panache for disposing of intransigent problems.  In this case, it took the form of a swim mask around February 1971.

* – Much of the historical accounts in this post — as well as most if not all of my posts — have been gleaned from Wikipedia, where full atribution by footnotes may be found.

The point of the last two posts “HIS NAME WAS ALEXANDER HAMILTON” and “DUEL AND DEATH” was to move the story along from Dad’s temporary digs at 974 Boulevard East in 1970/1971 to a new permanent location at 19 Hamilton Avenue, also in Weehawken.  As I remember those days, to say that I was ambivalent or uncomfortable about Dad’s relocation across the Hudson from New York City is an understatement.  While I understood that Dad moved to reduce his taxation and rent expenses, I nevertheless hoped that his move to New Jersey would be temporary, just like his move to Pennsylvania in 1965, and that soon he would be back home safe.

As I wrote the story, I found that I could not pass over the dreary monument on Hamilton that referred to the famous duel.  Before I knew it, I had written about 2 pages of ancient American history.  “Oh boy,” I thought to myself, “my critics want me to engage with the readers on a personal level in order to establish that all important take-away.”  I shook my head and felt that I was going to bore my readers, maybe even lose all 5 of them.

Slowly, it started to sink in that Alexander Hamilton also came to Weehawken to die.  Of course, Dad and I had no way to know it at the time but that house at 19 Hamilton Avenue was his (Dad’s) last residence.  And likewise, Hamilton didn’t know in 1804 that he was to be mortally wounded.

Suddenly the resonance of the two events – Dad moving to 19 Hamilton Avenue in early 1971 and Hamilton coming to Weehawken to face Burr in a duel in July 1804 – clacked together as two huge super magnets moving together deep underground.  There was a link!  And it was altogether unconscious as I wrote it!

I knew in my heart back in 1971 that this wasn’t a good place for Dad.  I just didn’t know how bad it was until after I wrote this post.  If there was a place where your parent was known to perish in the future, wouldn’t you try to keep them away from that spot? 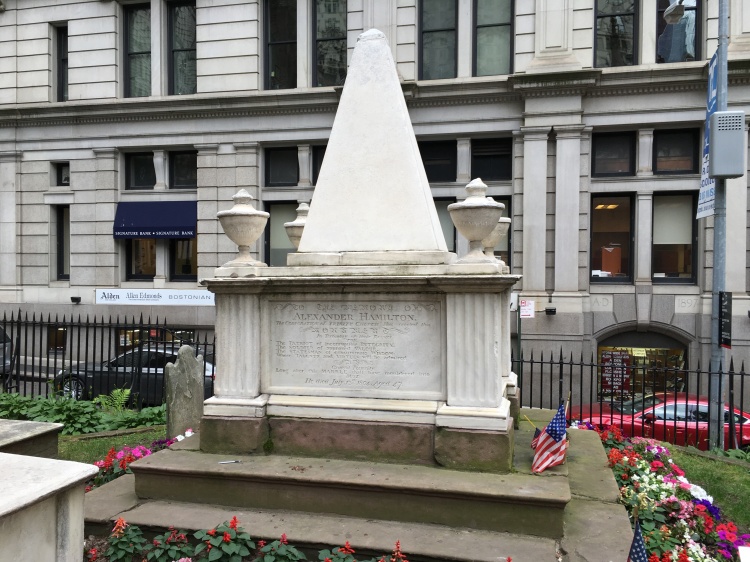 Final resting place of Alexander Hamilton in the Trinity Church cemetery, lower Manhattan.  Under perpetual shadow under the canyons of Broadway.  Photo by the author.