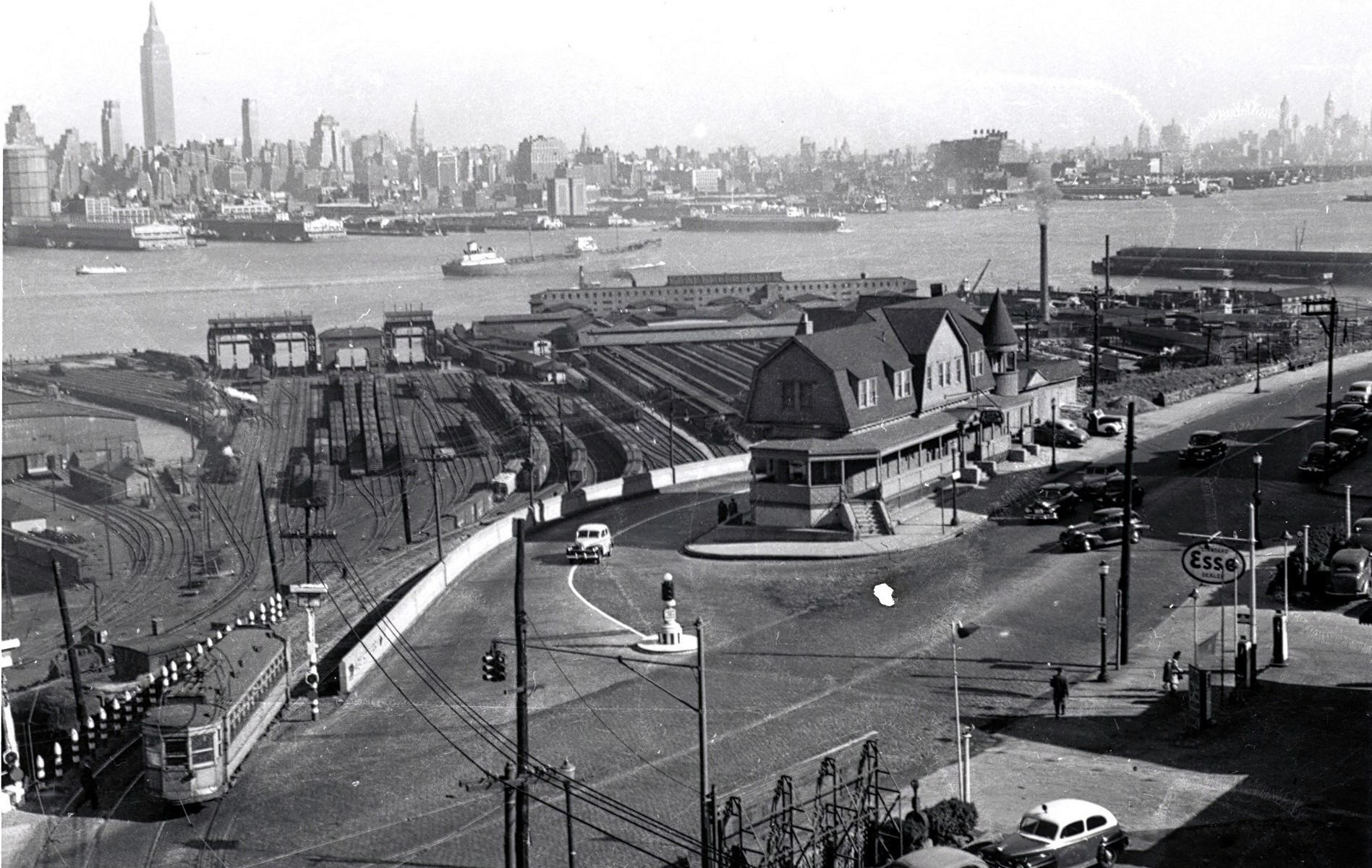 Dad turned right to head from Park Avenue (Weehawken) over to Boulevard East where he turned left.  Directly ahead was the Manhattan skyline, in full view from the Battery all the way past Morningside Heights.  The North Tower of the World Trade Center could be seen rising to the right.  “Look at that view!” he declared again.  It was magnificent.  The centerpiece was the Empire State Building stretching regally skywards.  Ordinary and old-looking row houses lined the other side of avenue.

We pulled up to 974 Boulevard East, with its Dutch Colonial roof, which is found in the center of the 1930s era picture above.  It was one of the very few buildings to be found on the east side of the Boulevard, which was usually only a sidewalk, the railing, the Palisade cliffs tumbling down to the river, and of course, the view.  From Boulevard East onwards to the west was a hodgepodge of gerrymandered towns, sort of like the ones on the north side of the Charles River from Boston.  With names like Guttenberg, West New York, and North Bergen, these communities had all of the grit of Cambridge but none of the charm (although today there is a lot of new construction).  By 1970, the trolley line, the railroad pier, and depot down the cliff were all gone, the pier destroyed in a fire perhaps 20 years earlier.  It was a dreary and derelict waterfront.  The rotten posts formed a large swath of dots in the inky water off the trashed riverfront below, missing here and there like bad teeth.

974 Boulevard East itself had three creaky levels.  There was an Irish pub restaurant on the first floor.  The second floor hosted the offices of Olcott International & Company, newly incorporated and busy paying patents renewals in 60 countries around the world.  And a small air-conditioned cocoon of a studio apartment at the penthouse, the third floor.  I called it the “Little Retreat.”  “Look at this commute,” Dad said as he demonstrated walking up and down the small staircase between the second and third floors.  We both looked out the window at the river, the skyline, and boats plying the Hudson.  It was a mesmerizing tableau.  Was it truly goodbye area code 212, and hello 201?

Wait!  Not so fast!  The new multi-line telephones in the office on the second floor served up three inbound telephone numbers; two were in area code 201, the local area code for Northern New Jersey.  But the third was something special – a “tie line” connected to his old telephone number in New York City: 867-5650.  Although he had moved across state lines, he arranged to keep his old number.  That same (212) number was also connected upstairs in the “Little Retreat.”  “I’m still in New York,” he argued, “I beat the system!”  Whenever his friends or my Mom called, it was always on his 212 number.

Out the back, the Hudson River was not quite a mile wide at that point.  With the state border right in the middle, we were maybe ten city blocks away from the border.  Dad had managed to move to the closest point to West 54th Street, just outside the city.  Effectively he figured he had all the advantages without the excessive tax, rent, and parking burdens.  On the Friday night drive to Southampton, he would even drop letters in a mailbox in Manhattan while passing through to avoid the New Jersey postmark.  So I pretended along with him that we lived in, for all intents and purposes, an enclave of New York.

When I met the new employees the next day, like Mr. Strothman who pronounced the word “invoice” like “inverse” or Gloria Mazaway who taught me the Jersey folk tale “Hoibie ‘n da toidy doity poiple boids,” (“Herby and the thirty dirty purple birds”), it was like entering a new culture.  For your delight, here is a video of a gentlemen giving the Herby story a good reading with the correct local flavor:

Even this accent is a source of disagreement along the New York-New Jersey line.  On the New York side, it is commonly called the Brooklyn, or the “Noo Yawk” accent.  Dese, dems, and dose.  On the other side of the river, it is known simply as the Jersey or “Joisey” accent.  Either way, I challenge you to tease out a difference between the two.  To my ears, it’s identical on either side.

Gloria Mazaway was an amazing woman.  Every afternoon at 3PM, she would loudly announce “fruit time” and would pull out a prime peach, nectarine, or plum.  After some quick work with a paring knife, the delicacy was ready for savoring.  Of course, it was Jersey Fresh produce from one of those luscious gardens far to the south.  Gloria made me feel welcome immediately.

Unfortunately, there was one thing even she couldn’t abide.  I let it slip one day that the office was really in New York.  This was truly sacrilege to Gloria, Mr. Strothman, and all the others.  The stink eye directed at me was palpable.  It was my first experience of the true demonic nature of the New York-New Jersey border.  How was I supposed to know that this was a big deal?  The line itself might have been only a 10 minute walk away.  BUT IT WAS IN THE MIDDLE OF A FREAKIN’ RIVER!  There were no ferries in 1970 so the only way across from Weehawken were three lanes of the Lincoln Tunnel – a filthy, traffic clogged, hell merging, finger flipping, honking, truck- and bus-filling, polluted fume breathing, foul-smelling, nasty driver filling, toll collecting, streetwalker strolling (NYC side only) HOLE of a vehicular artery.  Dad claimed it was only 15 minutes to Times Square.  He was right, of course, but only at 12 midnight when there was no traffic.  Any civilized time, you had to budget at least one hour to get through and on to your destination in Manhattan.  You could only get there faster if you could walk on water.

From the New York side, Weehawken was an oddly named unfashionable backwater, a drive-by district where the windows were kept tightly closed.  From the New Jersey side, New York City was a fearsome filth and crime filled zombie zone – with no parking! – as popularized by Charles Bronson of the upcoming Death Wish movies.  The new office workers were proud of the fact that they could avoid the city for years or even decades at a time!  They looked at me with amazement and/or suspicion when I would recount my experiences as a city slicker.

From 1970 onwards, Dad lived the life of a kind of a frontiersman.  By which I mean to suggest a certain sense of isolation.  A consequence of living on the other side of this line – even one so close – was that to cross it, a hard traverse was nevertheless necessary.  And because this one was so hellacious during waking hours, it was difficult for him to see his girlfriends during the week or hang out at the New York Athletic Club after work.  The latter slowly fell by the wayside and dating was relegated to Saturday nights in Southampton; he would go out for cocktails and dinner with one of the Jeannies while I would chat up a storm with Mrs. Fordham on her porch.

As for the move out of New York, Dad turned out to be in the vanguard.  During the 1970s, others followed and a corporate exodus of sorts from New York ensued.  Union Carbide quit their beautiful headquarters building on Park Avenue, as did Texaco and Celanese, all big clients of Olcott International.  Even the New York Giants moved to New Jersey!!  By the middle of the 1970s, the city was teetering on bankruptcy.  A major slump hit the real estate market.  Crime skyrocketed.  I wondered, at what point do you fight for a better life in your community as opposed to just run away from it?  Wasn’t there something of your past or your being that was worth preserving?  Sometimes it’s better to stand your ground and kick some ass.  Dad didn’t want to fight that battle.  An oddity since Dad was anything but milquetoast.

So at first I imagined for myself that Dad’s world in Weehawken actually was a small beachhead of New York City.  I tried it by various manners of reasoning, whether it be by conventional, or warped, or any other way of (his) reckoning.  But I was dissuaded of it within a few years.  Soon I became a teenager with demands of my own growing personal life that inexorably tugged me away from family.