My beguiling sister Victoria, with an admirer, sometime in the late 1980s.

As related in my post “Fear and Loathing on Second Avenue,” when I returned to New York in June 1965 for summer vacation, my stepmother Graciela was no longer there.  Dad’s third marriage had collapsed, fully and fitfully, a few months previously.  Her father had broken his hip in Ecuador that January and she had raced down there to be at his side.  From her point of view, what was the point in coming back to New York?

So Graciela became yet another void in my Dad’s life, one of many.  Whether it was the missing family in Lithuania, the Einstein letter, or the mystery of wife no. 1 (the one before my Mom), these black holes of his intrigued me, beckoning me to jump in.  I was learning that my leaps inside were dazzling experiences.

As for the mystery of wife no. 3, Graciela was actually one of two voids; with her on her trip home that winter was my infant sister Victoria.  I could remember her as a swaddling babe in her crib from the year before.  Little did I know that I would not see her again for 19 years!

If Graciela’s story was that she returned home to be with her family during a medical emergency, Dad’s story was much direr.  He was afraid that she would use her diplomatic passport from Ecuador to sneak back into the USA and shoot him with a pistol smuggled in the diplomatic pouch!  Apparently, Dad even contacted immigration to blacklist her if she ever tried to enter the country.  He was scared and scarred, both figuratively and physically.  So I was kinda sad for Dad.

Over the years, I had wondered about my sister in faraway South America; what her life must be like.  It struck me that she, like me, was a child of the same man living in an alternate and inaccessible universe.  I asked Dad where she was and he explained that her home town was Guayaquil.  I dutifully found this Pacific port city in a small mountainous country on my school maps, seeking information about her in vain.  Only once, in the mid-1960s, was there news of any kind.  He produced a grainy picture of her that he had gotten from a “spy,” as he explained to me at the time. I later discovered that he had kept in loose touch with Graciela’s sister who lived in Washington, DC. There was, of course, absolutely no contact of any kind between Dad and Graciela, just like there was none with his first wife.  Still, every so often I would ask, “Any news from Victoria?”  The answer was always the same, but over time the harshness from the initial years gradually faded. 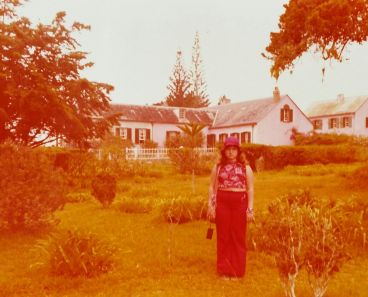 A world apart.  Left, me in Southampton age around 7.  Right, Victoria at Napoleon’s House, St. Helena age around 11.

In the winter of 1981, I had successfully found my family in Lithuania behind the Iron Curtain using the key left by my Grandfather.  As a kid, I had always thought of myself as some kind of hide-and-go-seek champion.  I was excellent on both sides; if you know where to hide, you know where to look.  After finding my peeps in a small eastern European backwater, I had the idea that I wasn’t half bad in finding anyone anywhere on this beautiful (if occasionally bitchy) planet.  After all, Victoria’s Mom’s name and the city in which they lived were known information.  Maybe that would be enough to find her.  As I shared with Dad the results of my successful search for the Arlauskas family, I was hoping to fuel a similar desire in Dad. After all, Victoria was an unresolved gap in his life. It would be correct for him to find her first. “Dad, you like challenges, don’t you? I asked one day, hoping to light a fire. He took me up on it and set to work. Maybe he felt too, that it was time to fix this.

By January 1982, Dad discovered the name of Victoria’s University and decided to try to make first contact with her there by telephone. He called and did not get through. So as a man of letters, he wrote her the following beautiful letter from a father to a long lost daughter. I am grateful to Victoria for furnishing a copy of it to me. It just might be the very best letter he ever wrote: I hope this letter reaches you.  I tried to telephone you at the Central University this evening but they told me that you were taking final examinations.

Since I don’t know whether you speak and write English, my interpreter will translate this letter into Spanish.

I remember you very well.  The last time I saw you, you were only 1½ years old.  I hear that you are a very beautiful young lady and I would very much like to see you and explain many things.

I hope you will be able to come and visit me in New York* where I have a house to accommodate you.  I will be happy to send you an air ticket.

Please write, and if you can, please write in English.

I love you very much.

Note: Although I made one spelling correction above, I did not change Dad’s use of the term “New York.”  His house at the time, and in fact for all of his later years, was actually in Weehawken, New Jersey.  He usually called it “New York.”

Victoria relates that January 27th was a special day for her. Although she did not receive the above letter until two weeks later, Dad did get her home number and the next day the two of them connected. I was very proud of Dad.

I gave it a little bit of time before reaching out myself. A week was about all I could wait. In the meantime, I badgered him for every possible detail. He said that Victoria was coming!!! He tossed me the number after I happily pestered him for it.

I held my breath and dialed up the long sequence of codes and numbers.

A lady answered the phone, possibly the maid, and I asked for Victoria in my best gringo Spanish.  She replied “momentito,” and that’s when the wait became interminable.  Seconds of a lifetime passed.  A lot happens in 19 years – playgrounds, spilt milk, first kiss, college essays.  At least her English was good as my Spanish was non-existent.

Victoria screamed with delight when I announced my name.  Language was not an issue.  She recounts of our first call, “I remember you were very funny and warm in your words.  No drama for all the last years.  Very good attitude on building a family relationship with Hermanita (little sister)!”

What I take away from our first conversation together ever was not so much the words we shared, but the fact of simply being connected.  Finding a long lost sibling is like discovering a part of yourself.  At the onset, you have no idea whether it will be a side you prefer, or one you would rather just leave alone.  Our parents were married in New York; we both should have been there growing up, not carried away down south.  In many ways, Victoria’s incredible journey was much more extreme than my own.

We had a lot in common.  She was very much a student, with a specialty in journalism.  Like her Mom, she was a leading journalist for El Universo, the New York Times of her country.  The list of people she had already interviewed was quite impressive, see the above picture.  (She says that Fidel was a complete gentlemen.  He promised to send her 3 gallons of famous Cuban vanilla ice cream, which never arrived).

We also discovered fairly early that we were both goof-balls, with a preference for silly humor.  Life is full of weirdness – weren’t we the proof of that? – and a great way to deal with it is to poke at it with a funny bone.

After our conversation, Victoria passed the phone to my first stepmother, who I also hadn’t spoken to in 19 years.  I could tell right away that I was speaking to a diminutive lady of class who giggled frequently with delight.  She told me how much she had loved and missed me since she had last seen me as a little boy.  And she said it more than once.

Thus linked, Victoria and I soon hatched an evil plot to meet in person.  It happened early the next year.